My design is based on both the Grumman 2 (I liked the recessed fenders) and the New Cub. The chassis is more like the Grumman, but the shape is pure Cub.

I did the design work in Ribbonsoft's QCAD. You can download an extremely useable demo that forces you to restart every ten minutes, allowing you to save your work. Works fine on Windows 2000. Recommended.

To get the side profile, I used the Cub profile from Andrew Gibbens's profiles resource, converted to metric and scaled slightly (rounded off, if you will). Where the Cub chassis is 86& = 2184.4mm, my chassis is 2180mm, for example.

On top of this goes the shutterply -- this is relatively inexpensive, low-grade plywood, which I also used to build walls in the house -- for example the bathroom and my cupboard.

Marking the large ellipses required a point off the board, here provided by... another board.

As you can see, it was raining. Good thing I had a roof to work under. Here I am making the lid struts, by clamping a piece of shutterply to the side and routing it to the same curve.

I ended up recessing the back for a spot to put the lights, number plate, etc.

Jumping forward, this is what the hatch skeleton looks like.

So, on to skinning the thing. I used hardboard left over from shelf backing offcuts from the house.

OK, now the door. There will eventually be two doors, one on either side, but because of time constraints I made one only to start with.

I fitted the hinges before cutting out the door, so that everything would line up. Worked, too.

Aliminium T to frame the door and doorway.

Tanya likes the look of bobhenry's Lexan-roofed teardrop. Dhazard on the same site did something similar.

I was worried about the bending radius, and I took the Rand-Lover out to pick up the polycarb, but...

I could have fitted that into the Golf. Also, no worries getting it to fit the teardrop curve.

Here I am annealing the aliminium for the curve at the top of the door.

The rear lid latches are from McNaughtons. At AAD 2012 I noticed these latches are also standard fit on Reva military trucks :-)

And here we are pretty much ready to go (lexan fitted). Still raining.

Two of these are welded to the chassis at the back to provide stability. Essential.

And a spare wheel! (Back under the roof because... it started raining again.)

We leave tomorrow. Early. Yes, there's a lot of cabinetry still in the making, but let's do a shakedown cruize first. Just out to Etosha and back, it's only 4200km...

OK, so we're back, and the polycarb sheet did not appreciate the sun. I'll have to find a different way of securing it -- larger holes and an aliminium cover strip I think, to leave some room for expansion.

Saw this teardrop for hire in PE.

Blog post about fixing the roof and the galley. Here's a copy (Also try the Teardrop category for blog posts I might forget to mention here).

[...] I never completed the galley and inside cupboards*. 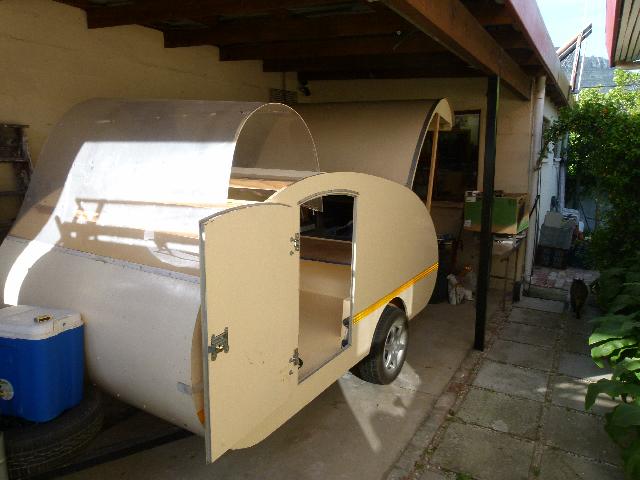 I decided to shorten the see-through part of the roof, taking it from the front to the top, not over towards the back. I'll have to drill bigger holes through the lexan to allow it to float, and use weatherstripping rather than trying to glue it down. 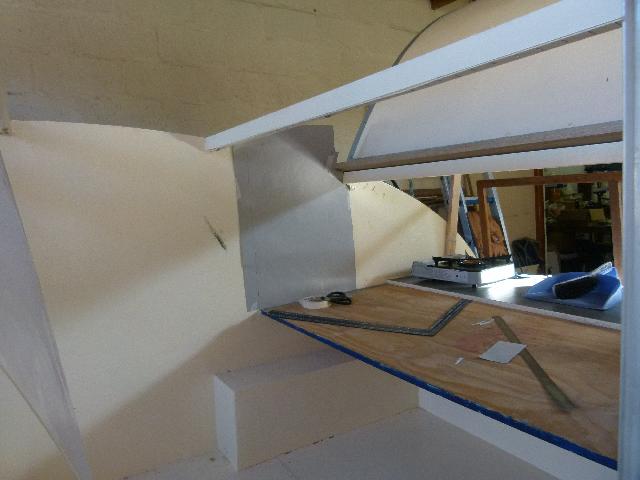 Here I am using my l33t template skilz so that I can cut two pieces of ply to the right shape.

Puzzling about the layout. No, three drawers won't fit.

(And a lot of cutting and screwing later) -- Looking good.

So I've been procrastinating with the second door. It's a major PITA. But it had to be done so...

As with the first door, I first bolted the hinges to the panel and then cut the door out. I tried to transfer the dimensions from the other side as accurately as possible.

Trimmed the hole with the same aliminium T section, and then ran into a problem. Because when I went to buy more aliminium, they were no longer there. And I couldn't find the same thing anywhere else. Found something similar at the fourth place I looked, it just had to do.

So the trim on the second door is kind of iffy.

Gotta have a bookshelf. And books.