If you wear camo and sit very quietly in the shade of a bush you can get to see interesting things. 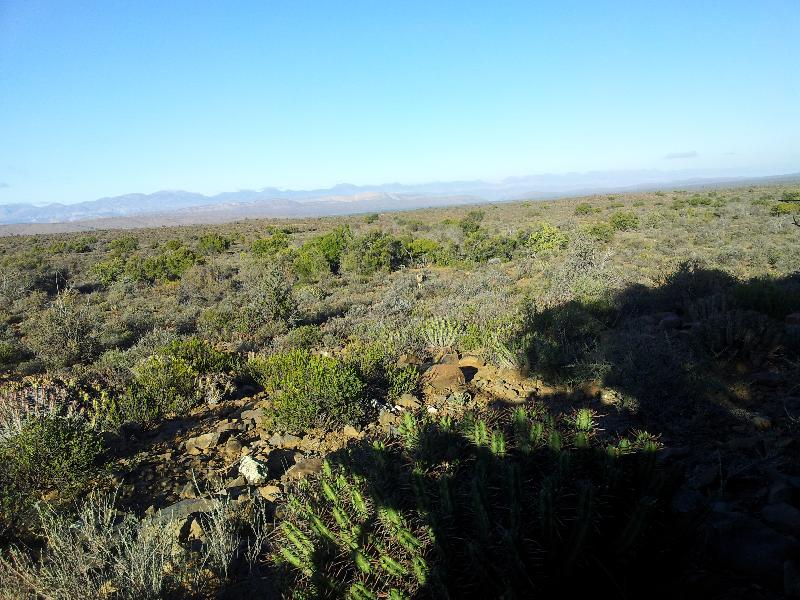 See it? Lemme zoom in a bit for you. 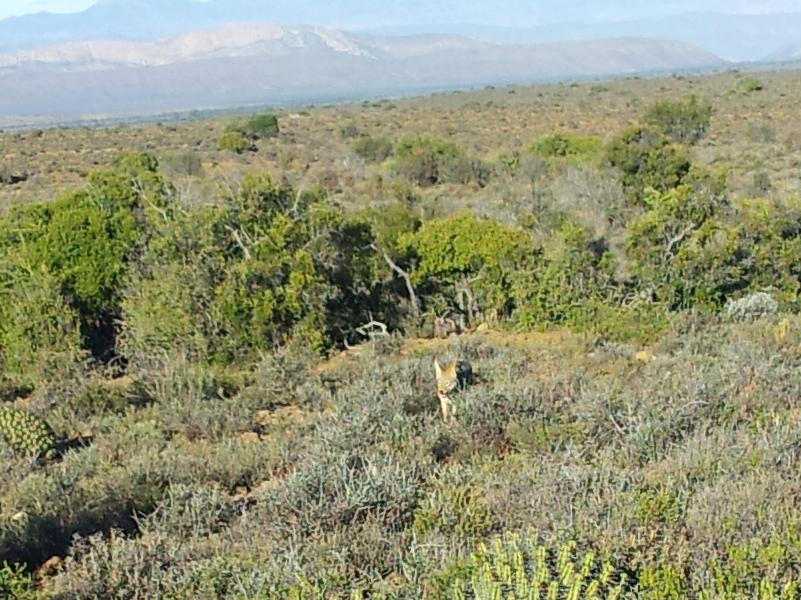 I sat watching this fellow as he was making a beeline pretty much straight for me. 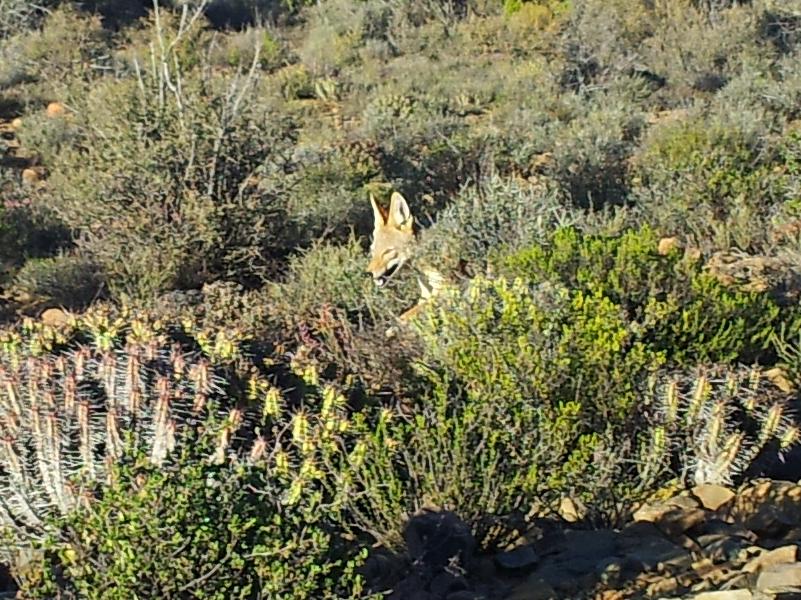 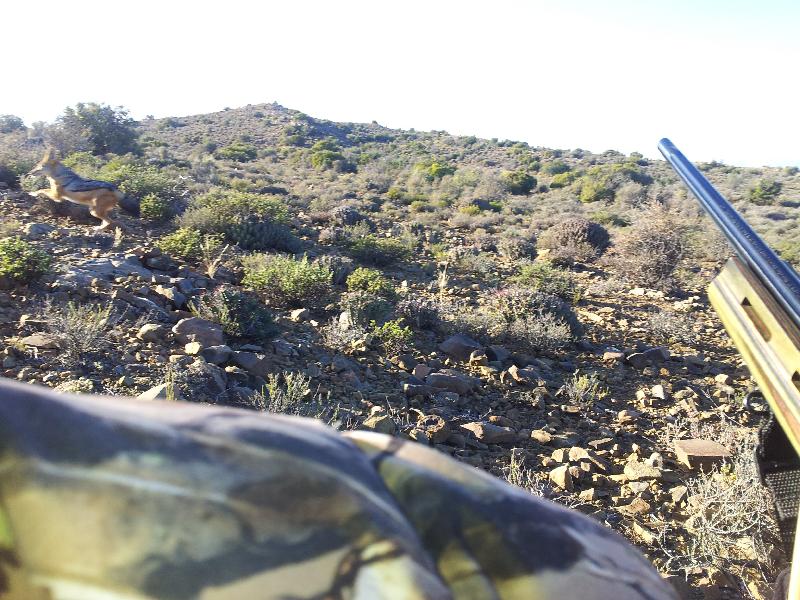 This is a split second after he saw me (the camo in the foreground is me). Changed his mind pretty quickly and made for the hills.

And the evening I had to eat a gemmerkoekie* as punishment for not shooting the blighter. Because there are two problem animals that get shot on sight on farms, jackal** and caracal***.

Why didn’t I shoot? The gemsbok were just behind that ridge ahead of me, and I was seriously considering changing my priority from kudu to gemsbok. That ended up not happening and I walked-and-surprised**** a nice young kudu bull the next day. So all turned out well.

* “gemmerkoekie” = ginger biscuit. But laced with Stroh rum. I like Stroh rum. This is a game I play to lose.

** Black-backed jackal, known as “rooijakkals” or red jackal in Afrikaans. The little bat-eared foxes and silver foxes are also “jakkals” in Afrikaans but you don’t shoot those.

*** I don’t think I’ll ever be able to shoot a caracal. And of course the african wild cat is rightly so a no-shoot.

**** You don’t walk-and-stalk a kudu. You walk-and-surprise it. It will see you before you see it, if you’re moving, and it won’t stay around for too long. And once they’re gone, they are gone. Over the mountain, down the other side, over the next mountain, and still going strong, while you’re still trying to find your second wind.

100 years ago, it seems that everyone all over Europe was itchy as all hell, and all that was needed was a tiny spark.

Enter stage left, a troop of students* who figure that killing the Archduke Ferdinand would be a just dandy way of getting the sweetties they’ve been stamping their foot about all along. This crazy is well matched on the Archduke’s side, who after being narrowly missed by a bomb in the morning sticks around town instead of getting the hell out**.

And even then all would have been well for Franz Ferdinand had they not got lost to the tune of accidentally finding Gavrilo where he sat nursing a cup of coffee, a grudge and a gun.

Not that anyone much cared.

But Europe was spoiling for a fight, and the finger poking and name-calling and posturing escalated. Germany had a long-polished plan to invade France which, by all accounts, it didn’t really want to use at the time, but then France went and tweaked Germany’s tail and then the trouble started.

Or at least, that’s how we mostly see things. Because history is written by the winners.

Nevertheless, the result was major bloodshed. Would they really have done it had they known what the price would be?

* Repeating myself, of course.

** In the finest tradition of some authors whose work I like, I will mention that the whole story is exquisitely explained on Wikipedia, for the low low price of free.

We’re slightly behind on that curve out here in South Africa, except there’s more graft involved.

I absolutely have to repost three videos my buddy Weer’d found while I was away playing hide and seek.

“So, in summary, firearms have (at worst) an immeasurably small causal effect on violence, violence is a systemic problem in certain communities, and focusing on singular horrible events because of media buzz is a nasty, racist attempt to deflect attention from the real causes, because those causes are embarrassing, and because certain useless symbolic actions look good.

“The idea that the police are not civilians is a deeply pernicious, dangerous one, and it is demonstrably false.

“The truth is a set of not-too-exciting little details, not a cute soundbite.

“Now of course, and I want to emphasize this, cops’ lives and jobs can be dangerous, and I want them to be able to defend themselves vigorously and successfully when that need arises. But when we define them by that armed conflict role, when that becomes their most salient characteristic, well, no good comes of it.

This third video doesn’t pack nearly the punch of the other two, but it does explain the firearm licencing process in South Africa quite accurately and quite well.

Here’s an interview for you.

The final act of ‘Top Secret!’ spoofs ‘The Blue Lagoon,’ a 1980 film starring Brooke Shields and Christopher Atkins — a film that was the ninth highest grossing film of 1980, but hasn’t retained a strong presence in popular culture today. Despite the disparity of their original box office totals, today ‘Top Secret!’ is a more popular film than “The Blue Lagoon.’

We don’t often get really cold weather. The first cold front of this winter was the exception.

I used some isopropyl alcohol to defrost Tanya’s windscreen, my car I just started up, turned the demister to full, and let it idle for ten minutes. 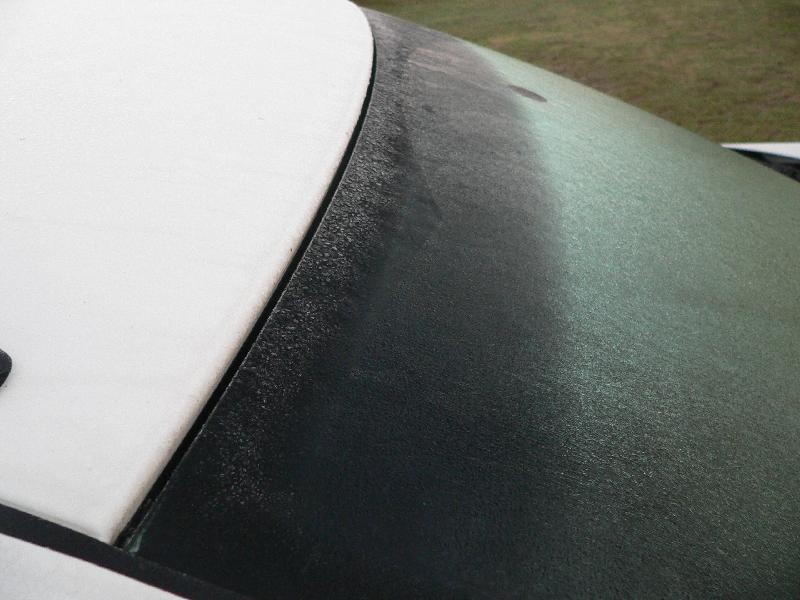 I also saw some frost on the grass next to the M3 in Tokai.

This is about as bad as it gets in Cape Town, temperature wise. That’s why we like it here :-)