As Orthodox Browningites, we set off to the range with a bunch of guns, most importantly my M1900 and M1911A1. 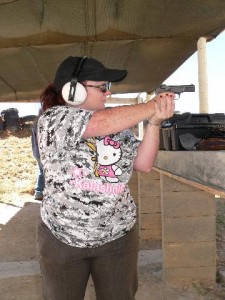 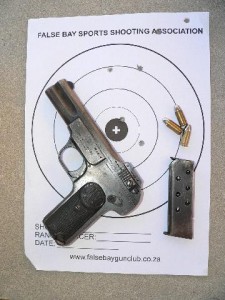 Julia shooting the M1900, and on the right the best I could do, six shots at 10m standing. 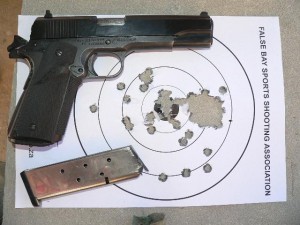 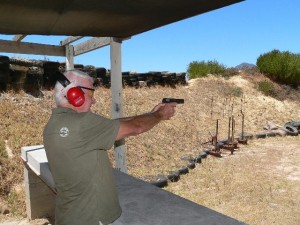 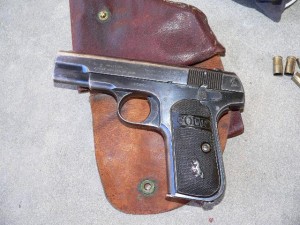 This gentleman was shooting his Colt 1903 Pocket Hammerless. 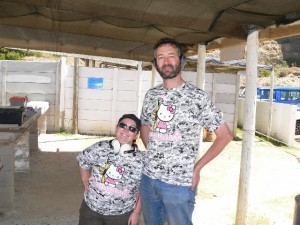 Paul Simer (“a young, married geek in West TN”) wrote the following, back in June 2007. It featured in my links, but then his site disappeared. I don’t know what happened to him, the last post I can find on forums and the like is a comment on Breda’s blog dated May 15th 2009.

I finally managed to dredge a copy of his guide out of the Wayback Machine.

I’ve taken so many folks shooting for the first time that I decided to create a page with all the information I wanted you to have before you hit the range. First is instruction on how to ensure safety while we’re there, then there are some specific rules concerning shooting as my guest at my particular shooting range. Finally I give you some pointers on what you can do to make your range trip more pleasant.

Why I’ve offered to take you shooting

If you’re not a mechanic and weren’t raised from childhood maintaining old cars, the internal workings of an automobile are a mystical, mysterious topic. If you hear a strange noise or smell a strange smell while driving, you’re terrified. Images start running through your head of hefty mechanic bills, or getting stranded when your vehicle falls apart. If you take the time to get familiar with your vehicle, learn to change the fluids and belts, maybe even purchase a manual, a mechanical problem with your car becomes much less frightening.

If you’re not a computer whiz, and rely on others to fix the problems with your computer when it breaks, then error messages and crashes are frustrating, even more so because you don’t know what’s causing them or how to fix them. When your computer starts making weird noises or rebooting randomly, you feel gripped by terror, deathly afraid that you’ve done something wrong. You never even think about opening the case to install an upgrade, because you have no idea what anything in there is. If you spent some time on Google researching your problem, you might find that the fix is not that complicated after all.

When you’ve never fired a gun, you have no way of knowing what to do if for some reason you needed to interact with one. You hear stories on the news of kids being killed while playing with guns, and may assume that firearms are inherently evil and dangerous devices, and you have your doubts about whether the benefits of having one in the home or carrying one in public outweigh the risks. You have no filter through which to verify that the technical information being given to you by the media is true. However, if the mystery of how they work and what they do is removed, you may find that your thoughts about them shift dramatically.

So I’ve offered to educate you, and I’m glad to do it!

The Four Rules of Gun Safety

Study these rules carefully. There will be a quiz before we begin. I’m serious.

Rule One: Always assume that a gun is loaded and treat it as such.
Lots of people are shot with guns that they or someone nearby assumed was unloaded. If you are handed a weapon and do not intend to immediately fire it, check to make sure that the chamber is clear and there is no round in the magazine ready to be loaded. Check it again before you hand it back. If you are aware that it is loaded, announce “It’s loaded” before it changes hands, even if you feel silly. I will show you how to do this for any weapon you will be handling before we start shooting.

Rule Two: Never point a firearm at anything you are not willing to destroy.
If you are handling a weapon, you must be extremely careful to always point the weapon in a safe direction. The ground is a safe direction, but beware of ricochets if standing on a hard surface like asphalt, and angle the weapon so it is not pointed straight down or in the direction of a person. Be careful not to point the gun at any part of your body. Downrange is a safe direction, provided there is nobody standing in front of you anywhere on the range. The sky (also known as up) is not a safe direction, as what goes up will eventually come down.

Additionally, take care not to “sweep” the barrel in an unsafe direction when moving the firearm. It is very easy to unthinkingly cross the direction of the weapon over the person next to you while moving from one point to the next, so be mindful of your actions. I do not enjoy having loaded weapons pointed in my direction, and will inform you loudly should you do so.

This rule does not apply if the weapon in question is in a holster with the trigger covered, or is placed on a table and is not being handled. Guns do not “just go off” by themselves, and are only dangerous when handled by a person. If we are sitting at a table, for instance, and I remove my sidearm and holster (without removing the pistol), and place both on the table, you need not worry about it. I will still take care not to point the weapon in your direction, but if for some reason it ends up that way and you would like me to move it, I will not be offended when you ask.

Rule Four: Be sure of your target, and what is behind it.
This is closely related to rule two. Are you sure that your target is something you’re supposed to be shooting? Are you sure that anything behind it is something that’s OK to shoot? Is there anyone or anything around that could move into your line of fire or that you could accidentally hit?

When the rules are forgotten

The beauty of the four rules is that if you become distracted and break one of them but follow the others, an accident may result, but the risk to life is minimized. For example, here is what happened while a DEA agent was giving a demonstration to schoolkids and didn’t think about safety. Nobody dies, and though he was injured, it is not graphic and he made a full recovery. Click the play button below.

[Link to dea.flv which you can find on YouTube]

So what went wrong here? First, at :18, our hero goes off camera and says, “This is an unloaded gun. This is an empty weapon.” You’ll notice that he doesn’t CHECK to see that it is empty. The slide on the pistol is locked back, which indicates that the chamber is clear, but what he does not notice is that there is still a loaded magazine in the pistol!

When, with great dramatic flair, he presses down on the lever that releases the slide from a locked state, the slide springs forward, grabbing a round from the top of the magazine and inserting it into the chamber. This is not a malfunction, but the intentional design of the weapon!

When his point has been made, he habitually points the pistol downward. This is a good thing, as he’s at least marginally following Rule Two. (Have you forgotten what it is already? Go back and re-read it.) The problem is, he’s focused so much on talking to the kids that he doesn’t take care not to let the weapon point at his own leg. Had he completely ignored Rule Two instead of simply marginalizing it, he could have accidentally shot a child.

Next he pulls the trigger. Now, he’s doing this because the design of that particular pistol dictates that in order to disassemble the weapon for cleaning, it cannot be in a “cocked” state, so pulling the trigger (with an empty chamber!) allows the gun to “dry-fire” and places it in a state where it can be disassembled. Force of habit is a powerful thing, but there was no valid reason for him to pull the trigger in this environment. Rule Three! Keep your finger off the trigger until you are ready to fire!

“I’m the only one in this room professional enough, that I know of, to carry this Glock Forty. I’m the only-” BANG! Talk about shooting yourself in the foot! By the way, for a “professional”, he could at least get his terminology straight, What he is holding is either a Glock model 22 or 23 that is designed to shoot a “forty-caliber” round. There is no such thing as a “Glock Forty”. Also, you’ll notice that he says to another adult in the room “I just had an AD.” He’s referring to an accidental discharge, but that’s not what happened. An accidental discharge is when a poorly-maintained gun has a malfunction that causes it to fire when the trigger is not being pulled. He had a negligent discharge, or ND, because he fired the gun negligently. All those stories you hear about police officers shooting themselves in the leg in the bathroom at a diner? Same story, only then it was probably a finger mistakenly placed inside the trigger guard, and then being forced down on the trigger when the officer attempted to holster his weapon. Only when we become complacent about safety do “accidents happen”.

So that’s the safety talk. We’ll review the four rules and their justifications before we start shooting. Remember, I’m going to quiz you!

Guidelines for the range

On the big day

If you have questions, you know where to find me!