You’ll either get it or you won’t, and in general it’s probably safer to bet on the latter.

I found the following while scratching around on The Digital Antiquarian*, and it really tickled my funny bone.

Elias was a banker, so we left with more than most. $1,600 to spend at the outfitters—three yoke of oxen, 2000 pounds of food, boxes of bullets and spare parts: tongue, axle, wheel. Two sets of clothes for each of us. “What kind of clothes?” the children asked.

“Who knows?” I said. “The store only sold Clothes. In sets, though. That’s something.”

Of course, my frame of reference for all of this is relatively recent, I grew up playing Hammurabi.

* “Filfre” is of course an obscure text adventure game reference.

(Or how I came back into the light)

Way back in I guess 1980 or thereabouts my father had a friend who (amongst other things) was involved in importing Apple ][ clones from “China” (which in those days was Taiwan and Hong Kong). My father bought us a “Unitron” Apple ][, and it was probably one of the best purchases he made, ever.

These machines were all 64K Apple ][+ spec, but at first we only had the tape interface and, not knowing anything about the Woz, I set out writing a breakout game. I seem to remember that it was in Integer Basic (Applesoft Basic on the mainboard, but I did have a language card) but I can’t remember just why I would have chosen Integer Basic. Anyway, this potential work of genius* was lost to the vagrancies of the tape drive. It wasn’t long until we got disk drives.

Anyway, *wavy lines* to the present, and my brother falls pregnant and mostly kicks me out.  So I moved a whole bunch of stuff, including a Puma, a pinball machine and an Apple ][, to Fish Hoek.

And then I had to make it work again. We truly live in the future. Resources I used to dream about are now a ten minute download away.  For example, Understanding the Apple II is available from Asimov or our local mirror or ReactiveMicro and it really describes the genius grade weirdness well. There are also various guides to quick troubleshooting at the above and other sites.

My Apple was dead. No reset “beep”. A logic probe showed activity on the address lines and on all but one data line of the 6502. Checked the other side of the buffer, same thing. Through the keyboard MUX and the data latches, same thing. I was loathe to set up the ‘scope to see whether it was a read or a write cycle, so I pulled the processor and found that I still had data on seven of the eight RAM chips (because the video logic still drives an address into the ram every other cycle). Replaced the RAM chip from one of the other banks and was rewarded by a “beep” and a cursor.

(Very) fortunately Jason Scott is wrong when it comes to my floppies. The few I tested (starting with completely unimportant ones, and after cleaning the drive head) boot and run just fine. I don’t think he’s far wrong though — I will be making copies with ADT Real Soon Now.

Unfortunately, my keyboard is not happy. The D key is Dee Eee Dee dead. Makes it difficult to play Castle Wolfenstein.

Oh, and I found a game I remembered about a year or so ago, that I could not remember anything more of than “The object of the game is to figure out the object of the game”. That game is of course Nightmare #6, written in Integer Basic by some hacker, maybe even the Woz himself. 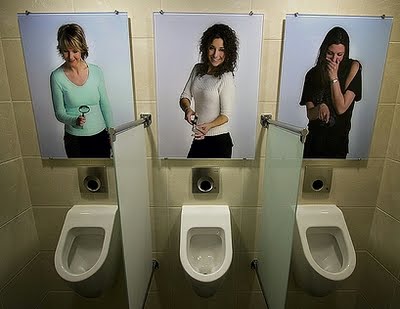 I mean, look at Marko’s! But hey, everybody’s doing it, so… 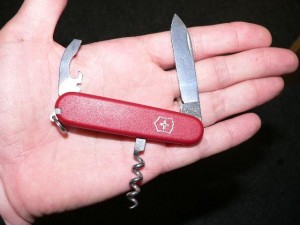 Just your generic Swiss Army knife. This is my third — I bought #1 in Switzerland in 1984 and wore it out about two years ago — the corkscrew tore out of the frame. I promptly replaced it — they’re cheap, less than a case of beer — and shortly afterwards donated the replacement to a baggage handler in San Francisco after forgetting to stick the damn thing in the checked luggage.

Driving to work this morning. 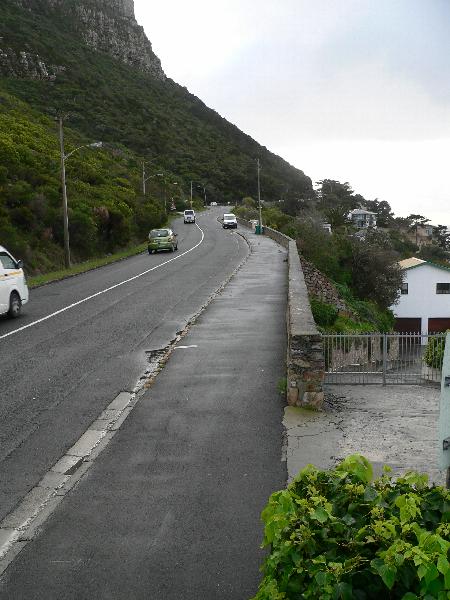 See that little white car parked on the side of the road? 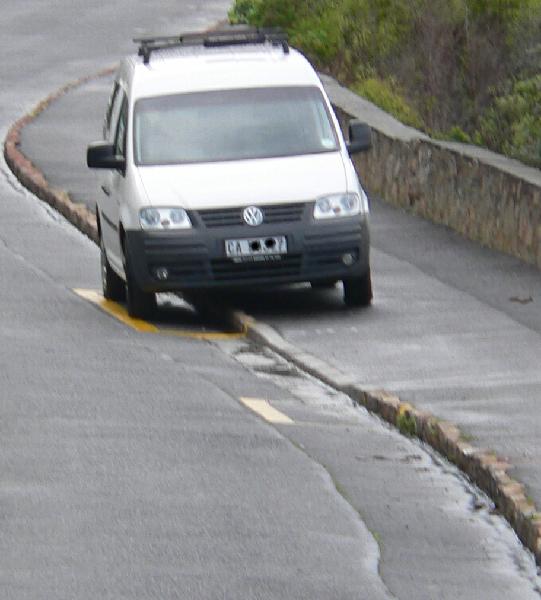 Yes, that’s the only piece of yellow line for about two kilometers.

As mentioned previously, I finally got around to completing firstly the door and then the TV part of the shelving.

Well, the third shelf also materialised, with a lot of fighting and cursing. 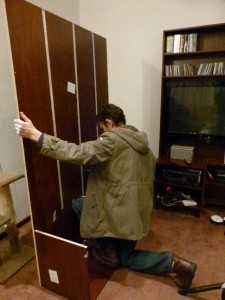 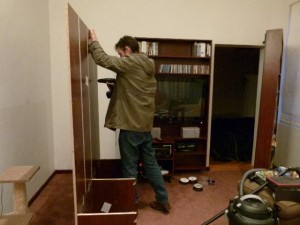 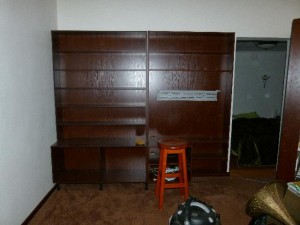 Update: and after populating with a small selection of our books: 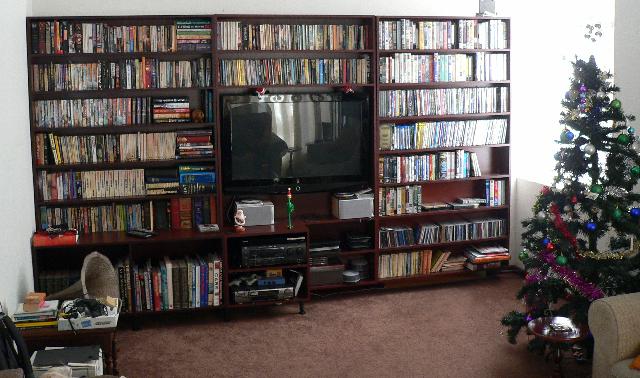