So I’m spending an hour or two each evening at the house. Which means that I don’t have time to cook, much. But we’ve already done pizzas and fish&chips this week, and Tanya had to go collect the kids’ reports, so… I decided to slap something simple together.

We had most of a roast chicken in the fridge (supper-in-a-hurry from earlier in the week) as well as mushrooms and red peppers so we decided to do a risotto (something I make often).

So I sliced some meat off the chicken and fried that in my black pot. Also cut op one small turnip that was lurking in the back of the fridge, added that. Took the chicken out, fried the mushrooms. Took that out (the turnip was also done by now) and started frying the onions.

This is where one would add the rice and then start slowly adding the stock, but I figured that all of this was going to take too long, so I stuck the rice in a separate pot, added some turmeric (some? Eish, Idunno, prolly about a level teaspoon, I didn’t measure. How much rice? Didn’t measure either, 3/4 of a cup I’d guess).

Added the red peppers to the pot, stirred a bit, deglazed the pot with some Petit Chenin, and put everything I’d taken out earlier back in. Added some water and a bit of chicken stock powder (won’t do that again, next time I’ll put the rice on sooner). Added some frozen peas.

When the rice was done, drained it, stuck it in the pot, stir, serve. My only complaint? Not enough chili. Figures, since I didn’t put any in. 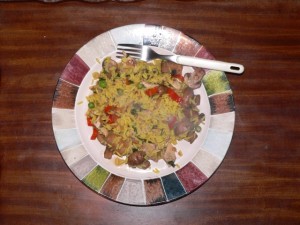 Jessica’s iPod is borken. Looks like the battery doesn’t hold a charge any more. And it’s one of those second generation shuffles, they’re tiny. 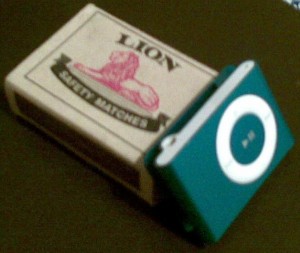 Fortunately there’s an online procedure showing how to replace the battery. And BatteryMill in the UK has batteries for Â£ 10.99, not including shipping. Also, Pieter is over there at the moment, coming back on the 4th of July, so I don’t have to worry about losing the parcel in the mail.

If I don’t blow myself up there will be an update here after the 4th of July.

Update : Pieter bought the battery from the UK, it’s made by Cameron Sino Technology and comes with a plastic spork which is completely useless, I had to rely on my 1984 Swiss Army knife. Model number CS-IPOD278SL, part number 616-0278, 3.7V, 200mAh (supposedly). 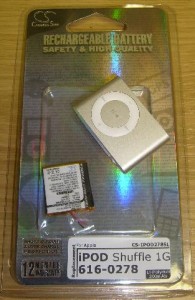 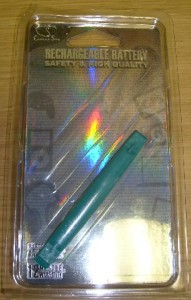 The guide is not that clear — the white cap on both sides need to be removed, and also the two metal brackets (four screws in total).

The battery didn’t want to just “flip out” it had to be persuaded quite a bit — it’s glued to the PCB. 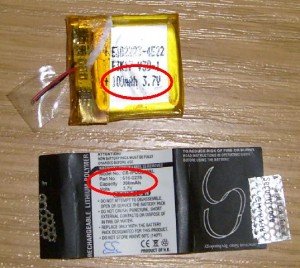 The battery comes with a security label “Warranty void if sticker is removed — but this label and the sticker around the battery has to be removed for the battery to fit. The sticker claims 200mAh, while the battery inside the sticker is clearly marked “100mAh”. Seems like Cameron Sino is guilty of a bit of… creative marketing…

In this specific instance, too lazy to deal with finding and hiring a professional tiler, so I’m getting Frank to do the tiling. Which means that I have to tell him exactly what to do. Which means more work and stress for me, not less. 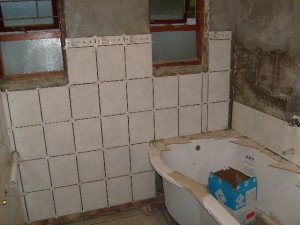 In order to not cut the tiles next to the window on the right, Frank inserted the thin strip of tiles in the middle. He’s good at thinking outside the box like this sometimes, but I don’t like it. So he’s re-doing it my way.

On the other hand, we had a “professional” tiler at Amperbo. And he didn’t do the job right, in my opinion, either.

And Frank listens to what I tell him to do, whereas the professional dude might not.

See? I can justify anything :-) 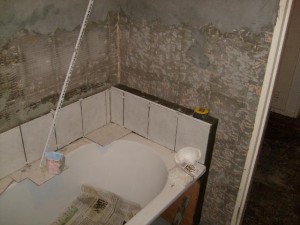 The wooden box I built behind the bath, shimmed to be exactly one tile high. This determined the level all the way through — in other words, Frank had to start two tiles lower on the wall in the first picture, making sure that he lined up with the top of the bath to bring the line through onto this box. I think figuring this out took him a whole day. 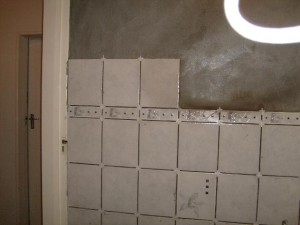 Tanya and I marked three places where we wanted the spotter tiles. This is not one of them. But it works.

Frank broke the first spotter he tried to fit into this position, so I went off to buy two more spotters this morning, one to replace the broken one and one to replace this one, which will stay. R90 each. !. 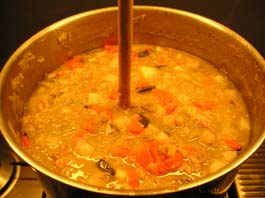 You can find about a million recipes on the ‘net, and I don’t really follow any one of them. Because why, I never can find celeriac (which many recipes call for) when I need it, and I use whatever pork catches my eye at the time of shopping. I’ve even made it with left over eisbein (BTW, the Nag’s Head in Noordhoek makes the only eisbein in the country worth ordering, IMO. If you know of other great eisbein places, let me know). And Tanya doesn’t like sausage, so that may or may not go in, depending on how strongly I’m feeling like soz at the time. Also, I’m not brave enough to try to sneak a pig’s foot or two into the pot, Jessica would probably never speak to me again.

So, based on the Soupsong recipe:

Get yourself a rather large pot, and boil about a litre and a half of water, then add 3 cups rinsed split peas and your smoked hock / eisbein. Simmer this for about two hours, stirring often at the start (the peas tend to want to clump) and occasionally as you go along.

Add 2 diced potatoes, 2 or 3 sliced carrots, some sliced leeks, a sliced onion, and two or three stalks of celery, also sliced, of course. And I guess celeriac if you can find it.

On the herbs & spices side, I tend to add more than just thyme and nutmeg, maybe one day I’ll try it with just the one teaspoon thyme, 1/4 teaspoon nutmeg and 1 tablespoon lemon juice that Soupsong recommends.

After about half an hour fish out the meat, cut it off the bone, snip it into tiny bits and stick it back into the pot. Along with your smoked sausage (anything from 250 grams to 500 grams of anything you like, although purists would probably come after me with tar and feathers for suggesting chouriÃ§o).

Traditionally served with rye bread and bacon. The next day. Just like a good curry, this stuff needs time.

And a tip for bacon : fry it as slowly as you possibly can. I’ve never tried doing it in the oven, though.

Meat Comes from Animals: Deal with It, or Eat Vegetables

I’ve been pretty much ignoring the master bedroom, after I decided on the basic layout. OK, every now and then I’d move the furniture around a bit, and I decided that the shower must not go in the corner where the outside door is (sorry Mike). 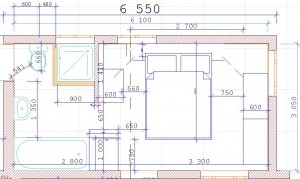 When I finally measured the positions of the two windows, the planned wall between the bathroom and bedroom lined up with the one side of the window perfectly. Serendipity.

Tanya wants a shelf around the bed, basically forming the headboard and bedside tables. I found the Nolte-Hewitts Senator range, which received the nod of approval (the basic layout and look, I wasn’t planning to import the stuff from the UK) but then I found a picture on the Fine Home Building website — this is what we want. (I subscribed to the site a while ago, there are many articles there which are well worth a read — if you are going to be spending R100k on a DIY renovation, you should also spend the $40 for online membership). 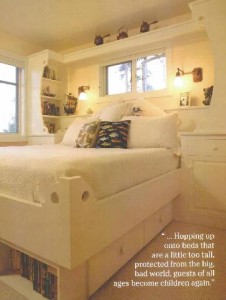 This picture is from the article Fanciful Built-in Beds. Unfortunately the article shows more detail on the other two beds only, the single picture of this bed is given just to frustrate someone like me, who now has to figure out how the thing goes together. But I’ll work it out… 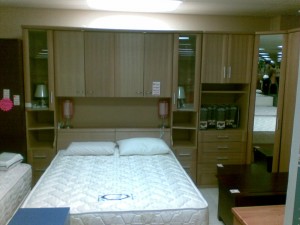 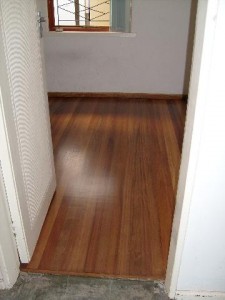 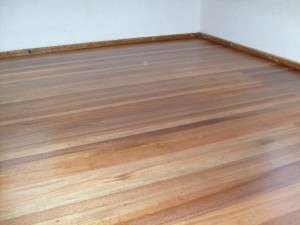 I guess I can get someone in to fit the kitchen cupboards but… that’s just… not my style.

So I’m speaking to Lansdowne Boards, they can custom-make stuff, which is what I need, because of my, let’s say, unique requirements.

So I made an appointment with the fellow at Lansdowne Boards, to CAD up the kitchen. This costs R399+VAT for the first hour, but it’s worth it if you don’t know what you’re doing, like YT.

And then I spent parts of the weekend pasting little cutout shapes representing kitchen units onto a grid representing the kitchen. Not that there’s much leeway at the moment, I’d already decided (with Colin’s help) on the basic layout, and it was more a case of deciding where the drawers were going than anything else. 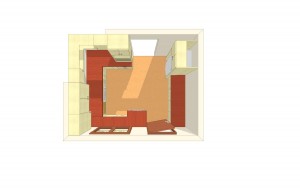 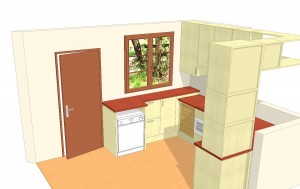 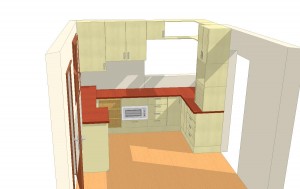 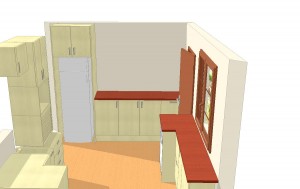 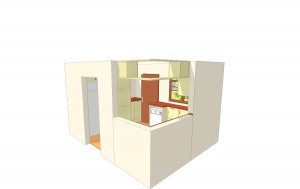 So this morning 0800 we sat down and played with his computer, and I came away with these pictures, as well as the set file. Which you can pull into the free-for-evaluation Kitchendraw program to manipulate.

Now we need to decide on the colour and pattern of the kitchen doors, and what the handles look like, and I want to adjust the size of the upper cabinet slightly, and then it’s write-a-cheque time.

I found Lawrence’s Guide to Ordering Home DSL, which is excellent if a little outdated. It works, but I found that there’s a slightly better option.

1. Phoned Telkom around the beginning of April.

2. Technician came out on 19 May, installed the little box the phone plugs into (the house had a phone, of course, but I took advantage of the situation and moved the insulator on my side of the wire to the pole to the garage fascia, ‘cos that’s where the firewall is going to live. (Edit : Inside the garage, not outside on the fascia, of course!)

3. Phoned Telkom on the 20th of May. Oh no, have to wait two days for the line status to reflect on their system.

4. Phoned them again 22nd of May. OK, ADSL, no worries, with free modem, two year contract, no extras, I have an ISP, thankyouverymuch.

6. I contacted Cybersmart, signed up. Saw that they have a new deal where middle-of-the-night bandwidth is 1/3 the normal price, but only if my ADSL is with them. Bugger.

So my modification to Lawrence’s guide is, go with Cybersmart for your ADSL and ISP.

When I got hold of Frank to do the stuff around the house, I went to see a reference to find out just what I could get Frank to do and where I would need to employ someone else. I was assured that Frank could do just about anything, but that I would have to watch him “on the squares” — he has a habit of not squaring things up.

Which brings us to tiling. I was (and still am) sort of worried about Frank’s tiling abilities. So I set him to tiling the bathroom floor, both square meters of it. That came out OK (but then again, it’s hard to stuff two squares of tiles up).

But then it came to the kitchen / dining room / entrance floor. Firstly we (Tanya and I) decided to use spot tiles here and there (which I did not think was going to be a problem) and secondly, after a lot of thought (about Frank’s abilities, specifically) we decided to lay the tiles at 45 degrees to the walls.

That’s the problem with not using the professionals. I not only have to understand the job, I have to figure out how to explain the job to Frank so that he understands.

But I think the lights went on this morning, we’ll have to see…