But not in the financial sense.

Tanya’s folks are staying with us. This started a complicated game of chess where they sleep in the main bedroom and Tanya and I end up in the Rand-Lover.

In practice, when Tanya tried to get into the Rand-Lover, she slipped, fell, broke her arm. 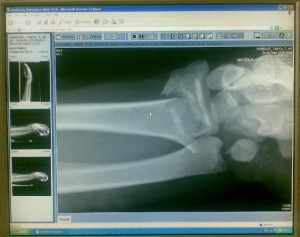 So there I was, driving over Boyes Drive going bee-baa bee-baa to get to Constantia Mediclinic. Which is a private hospital where, in theory, things should go quickly.

We were there for almost three hours.

After sorting out the more important people in the queue (and let’s face it, kids with asthma are more important than adults with b0rken wrists), the doctor confirmed that it looked broken, had X-Rays taken, and eventually bandaged the whole mess up, sent us home, scheduled an appointment for this morning.

So now we find out whether they need to open this mess up, stick pins in, whatever.

And they refused to give her Pethadine. Tanya was so looking forward to the Pethadine… :-)

Update: so Tanya now has a bionic wrist. They operated, aligned everything, put a titanium plate in there to hold everything together.

Well, actually, they eventually operated. We were supposed to check in at 8. Ten past seven the nurse calls, tells me that the doctor will be there 9:30. Cool. We pitch at 9:30, nobody knows nothing. Nurse tells me that the doctor will be available Monday. Monday? With a broken wrist? Like hell. I make a bit of a fuss and they scramble the doctor. Doctor decides that this is serious enough to do something about, even though he’s not actually on duty. Schedules Tanya for surgery.

So later I phoned and spoke to the nurse, who told me Tanya’s staying overnight. Ten minutes later the doctor phoned, we sort of concluded that I could pick her up at 3. Went there at three, nurse says no, five. Make that five thirty.

Meanwhile we have a bunch of Tamsyn’s friends coming for a sleep-over. I’ve been relegated to the Rand-Lover, on my own this time. But first I have to fetch Tanya, take the kids to the Spur, and so forth, and so on.

Update: This is what a bionic wrist looks like. The X-Ray on the right, that is (took me a while to realise that the view on the left is “before”). 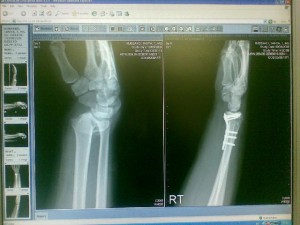 I’d wager it’s not what you expect, but it’s gorgeous. 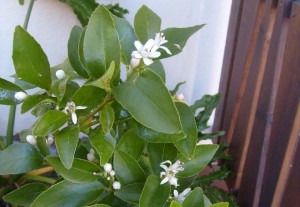 Our lime tree reminds me that we’ve been in the house for almost a year.

Meanwhile, it’s still cold and wet enough for Coq au Vin. My recipe is loosely based on Nigel Slater… loosely. But read what he has to say, it’s gospel.

I use drumsticks and thighs. A big pack, four drumsticks, four thighs, for four people.

For starters, peel about two dozen little onions (pickle onions, or whatever they’re sold as). Stick them on end in a black pot, with a bit of oil, and slowly caramelise. Turn them around, do the other side, etc. Remove to a plate.

Then the mushrooms — fry a punnet of white button or portbellinis in a bit of butter, remove to a plate.

Then fry bacon of some type. I use the thick rashers, cut into thin strips. Remove to a plate.

Now fry the chicken, in batches. I normally pull the skin off the thighs once it’s fried up enough to come loose easily. Remove to a plate.

Meanwhile you had a chance to chop upÂ  a large onion, three or four carrots, and a stick of celery. And don’t forget the garlic. Stick that all in the pot for a while.

By now you’ll have a lot of gunk on the bottom of the pot, so open that bottle of red and deglaze. I like to use a cheap fruity red from the Worcester area — something that would never win awards but goes down well.

Put the chicken back in the pot, pour the rest of the wine in, add whatever herbs you fancy (a bouquet garni is a good idea). I generally find there’s no room for stock in the pot, but I guess you can toss in a stock cube if you want to (this is how I do it, please don’t blame Nigel Slater). Also add the onions and bacon back in at this stage.

When it starts looking almost done, put the mushrooms in.

Serve with mash. Lots of mash.