Not surprisingly, Occupy Wall Street has become a magnet for thieves and con-men. As one organizer complains, “Stealing is our biggest problem at the moment.”

Then there are the bums. Originally, from what I can tell, street people were actively recruited by the Occupiers as a way of adding to their somewhat anemic numbers. But the naïve young hippies who make up the bulk of the movement are quickly discovering what the rest of us, with the benefit of actual life experience, already know about “the homeless.”

Over at Occupy Boston, a protester complains, “It’s turning into us against them. They come in here and they’re looking at it as a way of getting a free meal and a place to crash, which is totally fine, but they don’t bring anything to the table at all.” Another report concludes with a similar sentiment.

“We have compassion toward everyone. However, we have certain rules and guidelines,” said Lauren Digioia, 26, a member of the sanitation committee. “If you’re going to come here and get our food, bedding and clothing, have books and medical supplies for no charge, they need to give back,” Digioia said. “There’s a lot of takers here and they feel entitled.”

These kids had better watch out. If they start thinking that like this, pretty soon they might find themselves at a Tea Party rally.

Yet you have to sympathize with the cooks who have been besieged by moochers. Behind the hypocrisy, there are real lessons to be learned: lessons about the relationship between productive people and freeloaders. About the need for police to protect decent people from criminals. About how con-men and power-lusters always take over utopian schemes for their own benefit. About the taxing power and unaccountability of central authorities.

The 7mm International Rimmed is a wildcat cartridge developed by Elgin Gates in the seventies. Nothing strange about it, take a 30-30 case, neck it down to 7mm, and there you are. You don’t need to trim the brass or anything.

Before (bottom) and after fireforming.

Compare this to the 7-30 Waters, developed by Ken Waters (also in the seventies) specifically for levergun use. It’s also a 30-30 case necked down to 7mm, but in this case the neck is much shorter, giving more case capacity and of course more velocity. 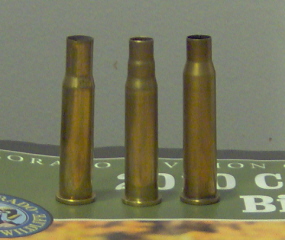 I’ve been shooting the 7mm TC/U in my 14″ Thompson Contender for a few years. Nothing wrong with the cartridge, shoots great, adequate power and everything… but the 7mm TC/U headspaces on the shoulder, and that means that if you don’t get your resize operation just right, you either can’t close the gun, or your brass stretches and the case head separates after a few shots. I carry a tap in my shooting box, this has saved the day for me and for at least one other shooter caught with half a case stuck in the chamber. A TC ideally needs a rimmed case.

So I had the choice of 7-30 Waters or the much less popular 7mm IntR, and I chose the latter because, as I said, the 7mm TC/U already has enough power for what I need to do, I don’t need power, I just need a rim on the case.

I think 7mm International Rimmed is the best 7mm TC silhouette shooting option, now to do some further load development. 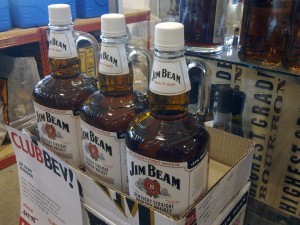 I found this forgotten picture on my cellphone. Took it in Los Angeles in June.

This is 1.75 liters of Jim, normal selling price $23, special price unfortunately not in the frame (you do need to be some type of cardholder member for the special price).

So it came to pass that I was selected to the Western Province (B) team for smallbore handgun. Shot a very decent 35/40 in Production, with my Anschutz Exemplar, and in as good if not better conditions the next day only managed 29 in Unlimited.

The main problem is that the ammo I’m using came from the last Swartklip run before they closed the factory, and I think by then they were keeping the machines together with duct tape and funny putty. And I didn’t think to shoot all forty shots from the same box — no, another box of 22LR bearing the same batch number should be the same…

My standing continues to suck, bringing my aggregate down to 101/160 for the four events. We still managed to finish fourth, we beat the Eastern Province A team (but in all fairness, they only had two people on their team, not three, so they were destined to lose) and the Free State B team.

I also shot my new (although I still have to licence it) Freedom Arms 454 Casull, it was shooting way high with the Cowboy 45 Colt ammo I got from someone else when I bought a Ruger from him. On rams, I could actually aim at the targets and not at the flowers between me and the target, and I managed 8/10. One always shoots really well with a gun before you actually pay for it.

My shooting partner for the lever action fun event tricked me into shooting after him, and since we were running an hour and a half late, it got somewhat dark, leading to guess-where-the-target-is. I managed 13, he beat me with a 14. Barstard.