There was a lot of Drama* and Blaming going on which didn’t suit me at all.

*I think they keep getting confused. Drama is on Friday’s  Zonals are on Monday.

Driving home Mike Wills mentioned that the first whales of the season were in False Bay. 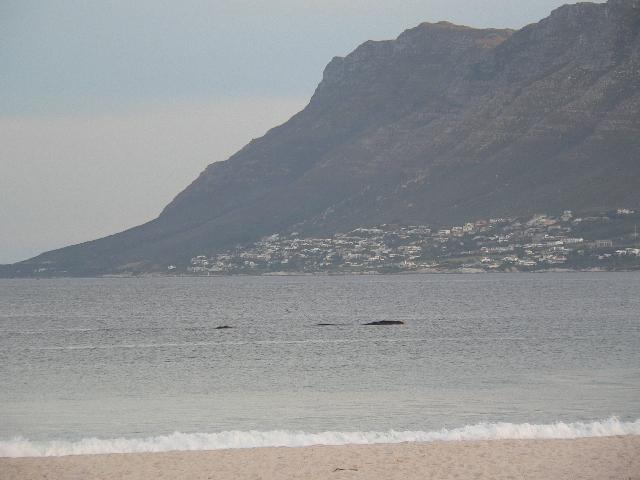 (Fish Hoek beach, looking out to the far side of Simon’s Town. That’s Boulders over there, for those of you with a thing for penguins).

Didn’t expect them to be so close to shore (OK, there’s a bit of shortening with the lens and all, but they’re right in). It was getting dark, so I didn’t stick around waiting for a more interesting photo opportunity.

“Our” fellows cruize in here around the beginning of September, bringing lots of revenue for small towns like Gansbaai and somewhat bigger towns like Hermanus.

<Tanya> I’m not going to read, I’m going to watch TV — I’ve been staring at a computer screen all day.

Waybackwhen the Firearms Control Act of 2000 was drafted, they couldn’t decide whether they should licence the person or the firearm. So they did what any committee would do — they chose both.

Which leaves us with the situation where you can be fully “competent” to own, say, a handgun, but then be denied the licence for said handgun because you didn’t prove to the registrar that you “need” it.

If you want more than two handguns or four firearms in total, you need to be a “dedicated” [hunter|sports shooter|collector]. This basically means joining an accredited organisation and jumping through whatever hoops said organisation choses to make their members prove their dedication. This can be as easy as attending four meetings or shooting four matches a year. Once you are a “dedicated” individual it becomes much easier to obtain a licence for a firearm appropriate to the organisation you are “dedicated” with. After all, if you are “competent” and have a letter from the chairman saying you need a semi-auto rifle* for 3 gun shoots or as a collector or whatever it’s really difficult for them to deny the licence.

So when I went through the rigmarole I obtained competency for handgun, rifle and shotgun. You have to prove you know the law and that you know how to make the gun go bang in such a way that you can broadly hit what you’re aiming at. I suspect that at the time there was no Unit Standard for semi-automatic rifles, or maybe it was a security business only thing, but whatever, I didn’t do the “self-loading rifle” competency.

Until yesterday, that is. Because they’re sitting on a licence application for a Browning semi-auto 22, and the only possible reason they might not give me the licence is that I don’t have this specific competency (this is not how we read the law, but our police are well known for their creative interpretation of the Law & Regs as well as their point of view that if you don’t like it you’re more than welcome to take the matter to court (where they will defend themselves using your tax money)).

And more importantly, I want to apply for a licence for a Garand, because why I can.

So I bought the book a few months ago, from Parow Arms & Ammo. Completed the open book exam, made an appointment, was handed a closed book exam asking the easy half of the questions from the open book exam, exchanged that for a competency certificate they had printed the week before, and then had to put ten shots into an A5 paper target at 10m with a Norinco LM4 (I think).

I’ve heard that one can fail the competency but if you do you should probably have someone help you with the shoelaces thing in the morning as well.