Today, seventeen years ago, we re-entered South Africa from Lesotho as part of the 50th Anniversary Tour of South Africa. All through 1996/1997 I’d been frantically putting a Land-Rover together, with much accelerated effort towards the end (if it wasn’t for the last moment I’d never get anything done).

With help from my brother, we ended up getting the Rand-Lover through roadworthy at the end of February 1998, and Elmari and I left on the trip on the 6th of March. It was a bit… frantic.

Since then, this mysterious package has been kicking ’round the back of the Rand-Lover.

But what can it be? 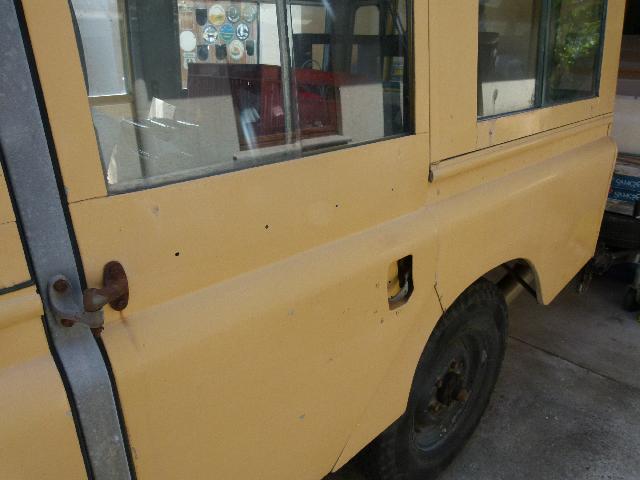 …that goes on the back doors, here.

The intention was to fit these somewhere on the trip. A lot of things did get fitted, but the trim did not make the list.

Yesterday, Eskom blessed us with some more electricity rationing. There’s a round ‘tuit for me! Yay!

I used these captive nuts and M5 machine screws. 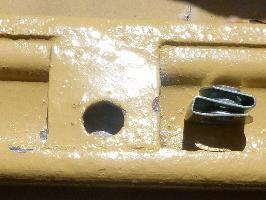 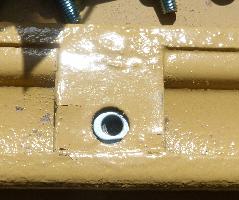 And there you go (actually it was a lot more finicky than it looks). 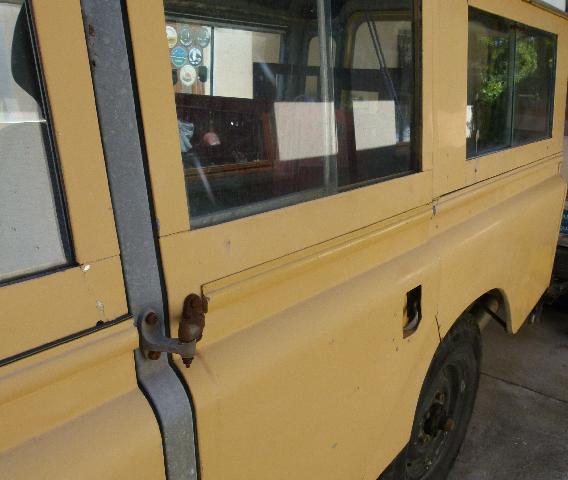 The colour mismatch is 17 years’ worth of fade on the door. Not too bad, actually.

I decided to leave the nearside door for another 17 yea… nah, kidding, I did both.

Some people collect tiny transistor radios. I don’t have enough of them to call it a collection but I guess I’m working on it.

The Ross Electronics Corporation imported transistor radios from Japan from 1955 to about 1970. They were located at 589 East Illinois Street and later (I think) 2834 South Lock Street, Chicago. As far as I can tell, there’s no relation to the Ross Radio Company of Youngstown, Ohio. 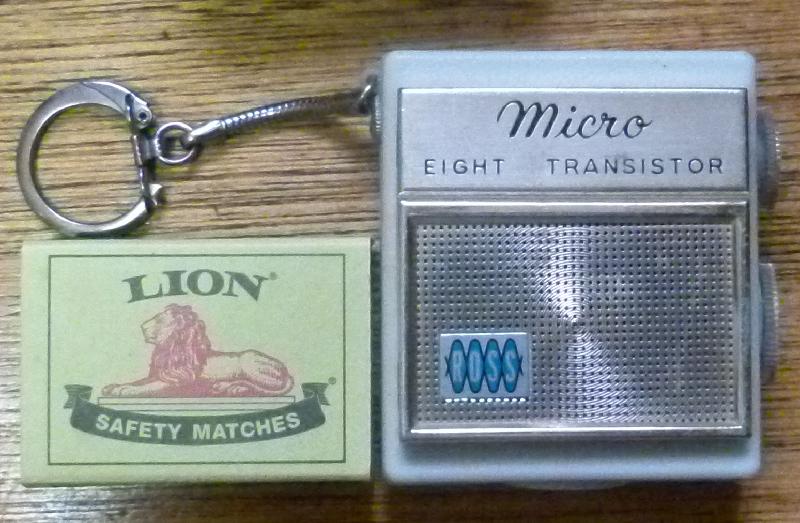 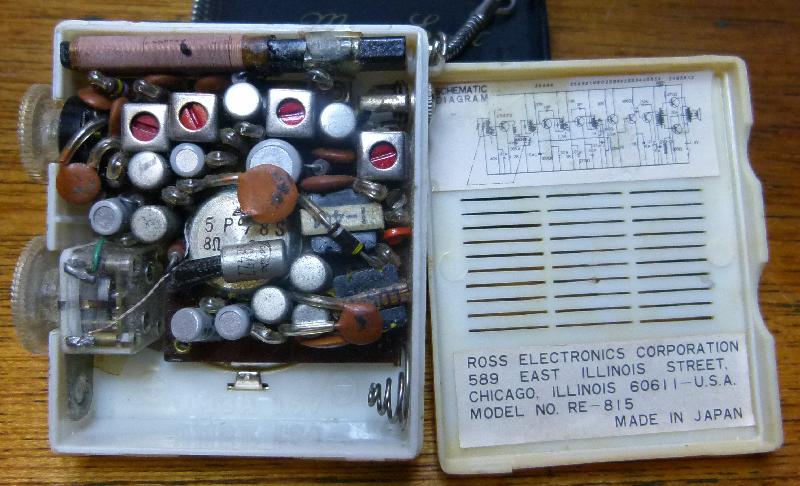 Here’s a better image of the schematic on the inside of the back cover (yes, there was a time when radios came with schematics).

It would be a mistake to expect good performance from a 1965-ish design running on one 1.5V cell, but the performance of my one is beyond mediocre. But then again, I didn’t really buy it to use it.

Mike has a nicer one, in a box nogal.

We have at least one copy of everything Sir Pterry ever wrote. At least one, because both Tanya and I were fans long before we met, and the libraries merged.

I discovered Discworld when The Colour of Magic hit paperback, back in ’85 or so. Been hooked since. Re-read the whole thing recently, it’s so obvious that while the author really wants to write parody, the Discworld keeps forcing him back into Being Serious.  And that’s the thing. While Discworld is light-hearted, the issues are serious. You can read right over all of that without skipping a beat, or you can take your time and realise that real issues are being addressed. 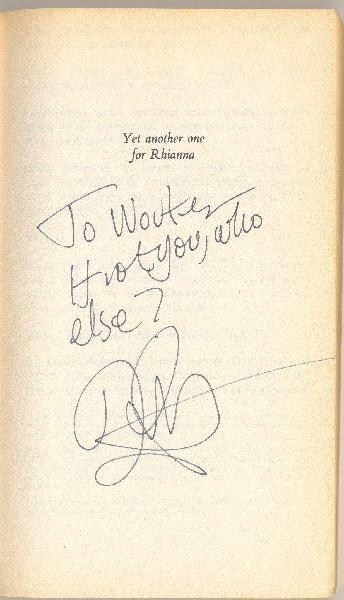 *Sigh* I guess we sort of expected him to be Cohen the Barbarian, so adept at surviving that nothing can kill him.

In 1982, Spider Robinson wrote a short story about copyright law in the future.

Copyright ceases to exist fifty years after the death of the copyright holder.   But the size of the human race has increased drastically since the l900s–and so has the average human lifespan.   Most people in developed nations now expect to live to be a hundred and twenty; you yourself are considerably older.   And so, naturally, S. ‘896 now seeks to extend copyright into perpetuity.”

“There are eighty-eight notes.   One hundred and seventy-six, if your ear is good enough to pick out quarter tones.   Add in rests and so forth, different time signatures.   Pick a figure for maximum number of notes a melody can contain.

And one has to conclude that

“Artists have been deluding themselves for centuries with the notion that they create.   In fact they do nothing of the sort.   They discover.   Inherent in the nature of reality are a number of combinations of musical tones that will be perceived as pleasing by a human central nervous system.   For millennia we have been discovering them, implicit in the universe–and telling ourselves that we ‘created’ them.   To create implies infinite possibility, to discover implies finite possibility.

Have you ever seen a cheerful elephant? 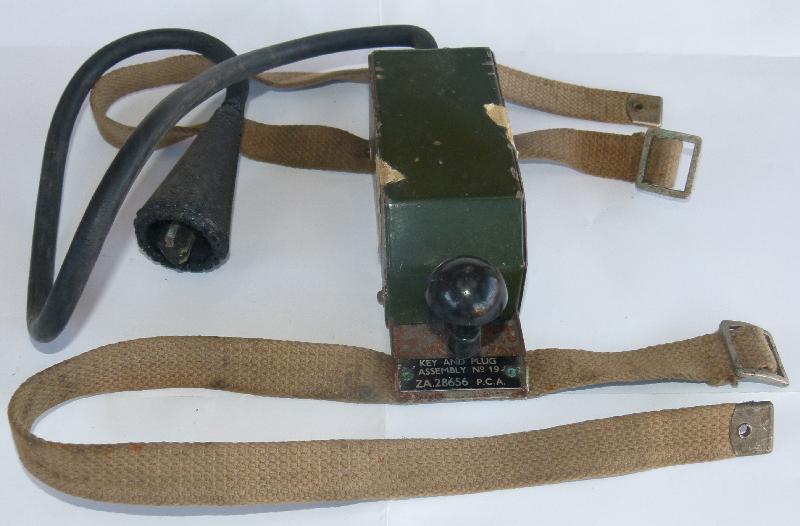 Trust the military to call a Morse key a “Key and Plug Assembly No. 19”.

It goes with the Wireless Set No. 62, which was vehicle mounted. You strap the key to your leg so that you have one hand free to hold on for dear life while presumably frantically tapping out code with your other hand.

In 1951, Cyril Kornbluth wrote a short story where a fellow ended up way in the future. A future populated by morons, because intelligent people breed less.  A future with passenger cars

Swept-back lines, deep-drawn compound  curves, kilograms of chrome. He ran his hands over the door- or was it the door?-in a futile search for a handle, and asked respectfully, “How fast does it go?” The psychist gave him a keen look and said slowly, “Two hundred and fifty. You can tell by the speedometer.”

Barlow began to wonder if he knew what a kilometer was, exactly. They seemed to be traveling so slowly, if you ignored the roaring air past your ears and didn’t let the speedy lines of the dreamboats fool you. He would have sworn they were really crawling along at twenty-five, with occasional spurts up to thirty.

The future is here.