Tanya’s car going up in smoke left us with a slight transport problem.

You see, the Rand-Lover was leaking water from the thermostat housing, and I figured it’s the gasket. So I pulled the housing, bought velumoid, psyched myself up for the job, thought about it, drank beer, and otherwise procrastinated, as dictated by my basic nature.

Which lead to me hurriedly bolting things together on Wednesday evening. And guess what? It still leaked. Made it to work by pouring water in the top faster than it could run out the bottom, or side, in this case. 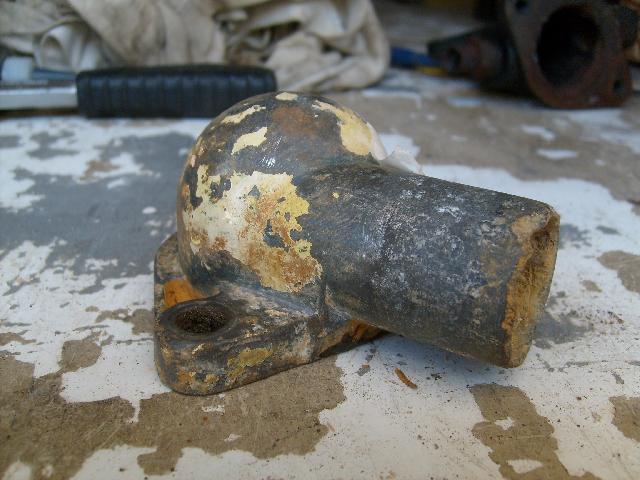 Removed the thermostat housing and got our driver to take it to a MIG welding place, where the fellow shook his head and frowned. Whereupon I phoned around, looking for a replacement, but no such luck. Apparently these things have by now all corroded away in a similar fashion to mine.

So Tanya had to give me a lift home last night, which also means that I had to give her a lift to work this morning. 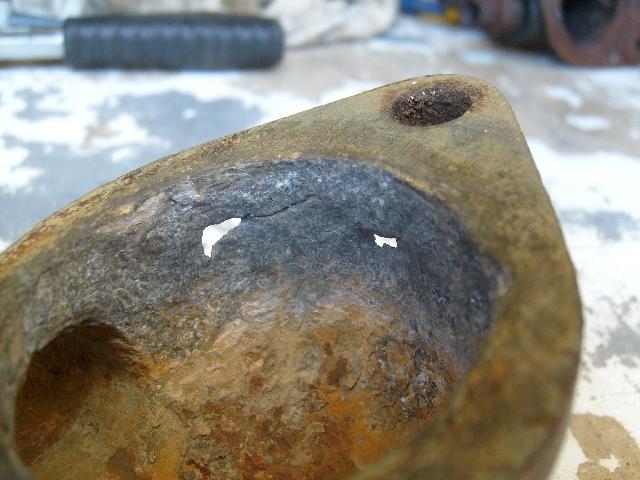 I used the opportunity to shoot through to Bellville, where I have a shipping container, will all the stuff I’d accumulated when my ex kicked me out, as well as a bunch of stuff I’ve accumulated since then. Gads, I love my stuff. 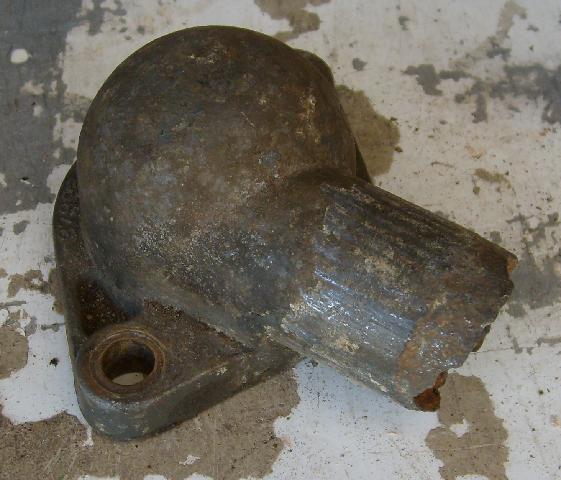 And there I found, as I rightly suspected I should, the thermostat housing which I didn’t use, because it was then the worse of the two, but of course now it’s by far the better of the two.

Which means that the Yellow Rand-Lover rides again. 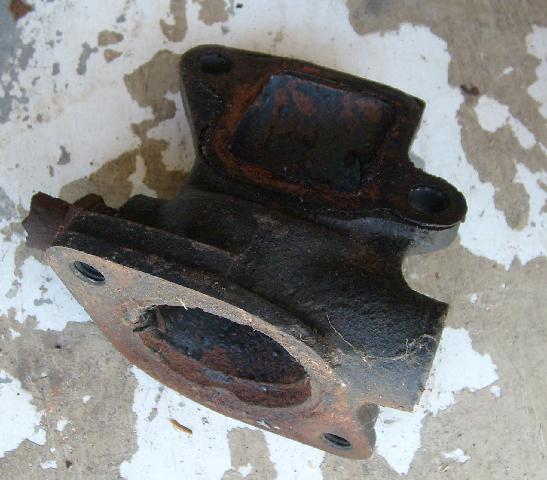 For your further edification, I present Plan B. Or is that Plan C?

This is the bottom thermostat housing off the front of the Chev 2.5 engine head (in other words, the bit that the broken bit in the previous pics bolt on to). With a piece of pipe, an angle grinder and an arc welder, one can create a functional equivalent to the aliminium part, but one that should last as long as the rest of the head.

Which means all of y’all can relax now.

First AD rolls his deer magnet, then Breda gets rear-ended, and then Tanya’s car catches on fire on the M3. Tanya blogs, so I guess it counts. 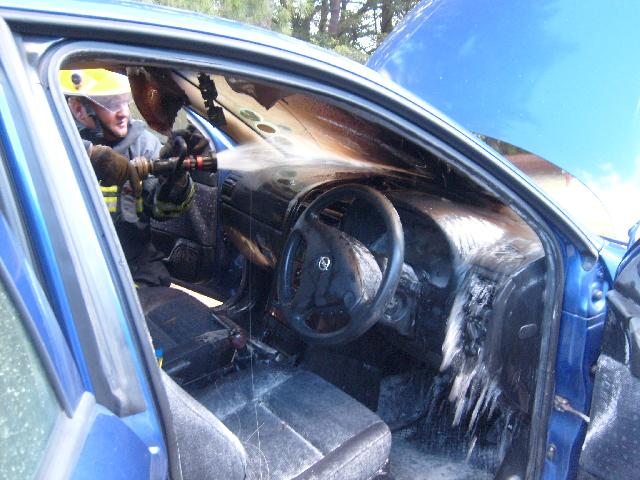 As far as we can tell, the aircon fan shorted out. Smoke poured out the dashboard, Tanya pulled off, called me. I got there, yup, looks like smoke all right. Opened the door to open the bonnet, and the fresh air fanned flames, coming out the dash. Hmmm. Not an easy fix then.

Disconnected the battery, left the car to stew. Fellow pulled up, handed me a fire extinguisher, I shot it at the dash, closed the doors again. We figure that might have helped keep the temperature down to “smoulder” instead of “burn”.

Fire department arrived around an hour later. Dumped a few hundred liters on the dashboard, making sure the smouldering is out. Car was a write-off anyway. 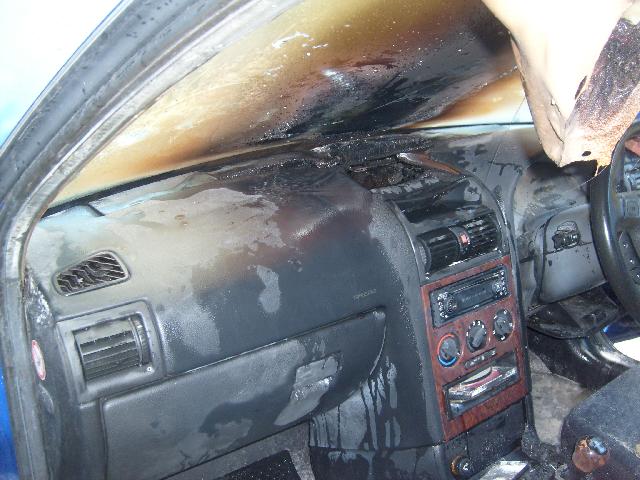 So now Tanya and I smell of smoke, and we need to go car-hunting again.

Moral of the story: make sure you have marshmallows in the boot. 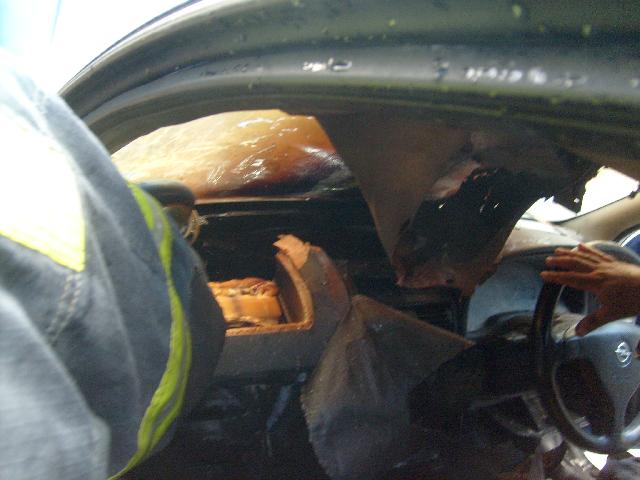 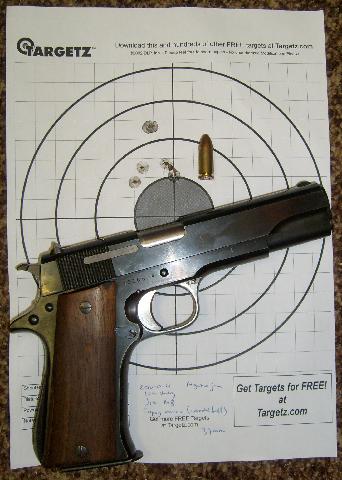 Star MB. Six shots at 10 meters standing. The magazine was giving me problems, so this was a two shots, clearance drill, one shot, clearance drill… kind of thing. It came with four magazines, but I’d left the other three at home… silly me.

The Star MB is a Model BM built on a Model M (large) frame, but chambered in 9mm. Like many Star pistols, anyone who knows the Colt 1911 will be familiar with the mechanicals. It comes with a detachable rifle type stock which also doubles as a holster, and with extended magazines.Â  This one is nicely accurate (no, I’m not hiding flyers under the gun). 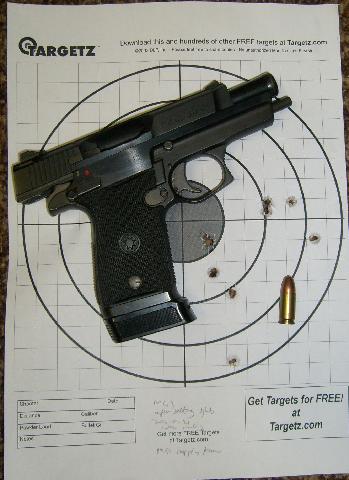 Star Firestar M43. A fairly modern 9 mm (they were made in the nineties, shortly before the demise of the Spanish firearm industry). A few years ago, I was looking at buying one of these new — I would have chosen the 40 S&W model — but I couldn’t bring myself to pay R 5 500. I got this one for considerably less. 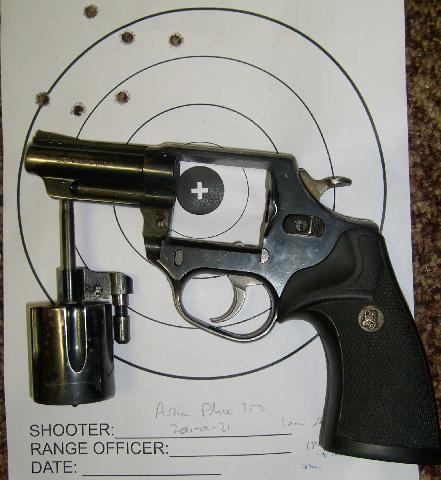 Astra Police 357 Magnum. This revolver is very similar to the standard Astra 357, except that there’s a button that releases the cylinder crane, then you can swap in a 9 mm Parabellum or 357 SIG cylinder (neither of which I have, unfortunately).

I also managed four shots with my Browning 1900. Shot #5 was a missfire, and this is where I learned that the extractor is broken. Bugger.

In any case, the Browning 1900 is a fascinating design. The barrel sits under the recoil spring, and the recoil spring also doubles as the hammer (striker) spring. And the back end of the lever which drives the striker doubles as a “cocked” indicator, blocking the (rudimentary) sights when the gun is not cocked. 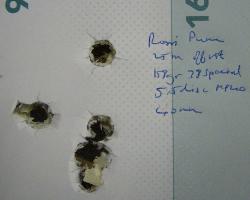 My Rossi Puma 357 levergun shoots into 40mm off a rest at 25m using 38 Special handloads. Not great, but I should be able to fix that with better ammo. And it’s a damn sight better than my Winchester ’94, which struggles to get 4 inches at the same distance. 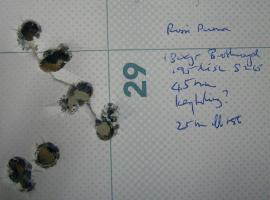 My “silhouette load” 180 grain lead bullet 357 Magnum loads keyholed into 45mm, so I guess I should stick to 158 grainers with this gun.

…the sun is going down, sinking behind bridges in the road [1]. 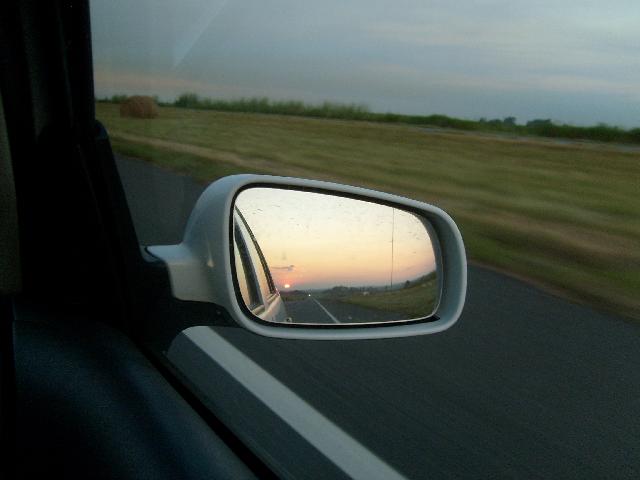 I took a quick road trip up to Witbank to collect some shooting goodness about which I shall still blog. Left Bellville at half past four on Thursday morning, turned the xcarlink to 11, and 15 hours (14 hours driving, one hour spent filling up the car and self) and 1498 kilometers later, reached eMalahleni (AKA Witbank).

Found the guest house, where they had a very reasonable (R300 B&B) single room for me. Turned out to be noisy, with the other guests arriving late and leaving early and not being quiet about it. Breakfast was good, though, and I can’t complain about the price.

Went over to Classic Arms and picked up 12 firearms. Also checked out a rifle for a friend, and had a look at some items which will be on the next auction. 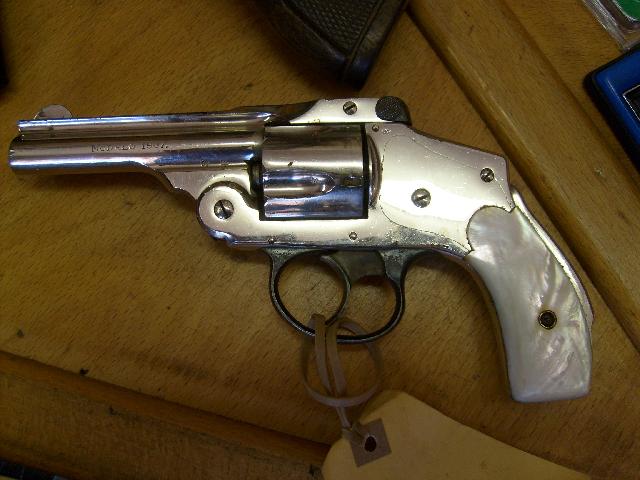 Spanish copy of a Smith & Wesson safety hammerless. Mine. All mine. Yea, I’m crazy like that.

From there I shot through to Camdix in Krugersdorp, stopping only to collect a R 100 speed fine for doing 137 in a 120 zone, downhill, in the middle of bloody nowhere.

On Saturday, I discovered AFTA, a gunshop and training centre in Cresta. Told them I collect Spanish Handguns, they pointed me at a crate full of guns and said “knock yourself out”. I ended up unpacking two crates, found an Astra Regent, a 32 Largo Ruby Rubi (which is a Brazilian copy of a Spanish copy of a Smith & Wesson…), a couple of 32 Cadixen, and an Astra Police in 357 (no sign of the 9mm cylinder, sadly).

And that concluded my business, so I waited for my brother to conclude his, and at 14:00 we headed south.

Had coffee, went home (where home is the one this blog is mostly about), woke Tanya up and said hi, kipped a bit, and went to the range with some of my new toys. Shootty post to follow.

[1] Some of you would recognise the Pink Floyd lyrics. 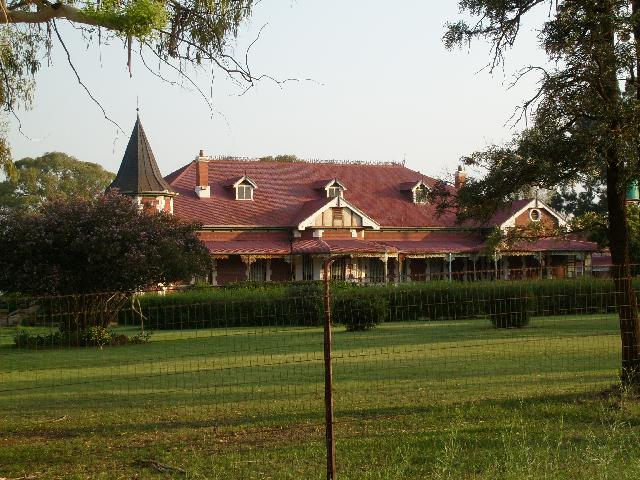 I saw this while driving past at a high rate of knots, hit the brakes, and went back to investigate. 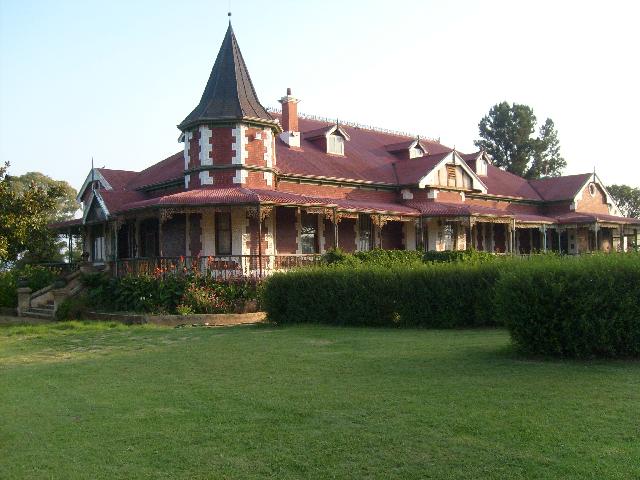 The gate was open, and I’m not scared of “Beware of the dog” signs, so I went in and started taking photographs (the dog turned out to be a sweetie anyway). 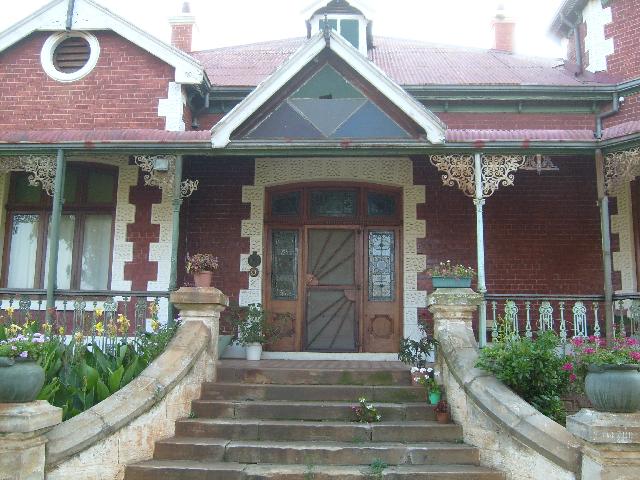 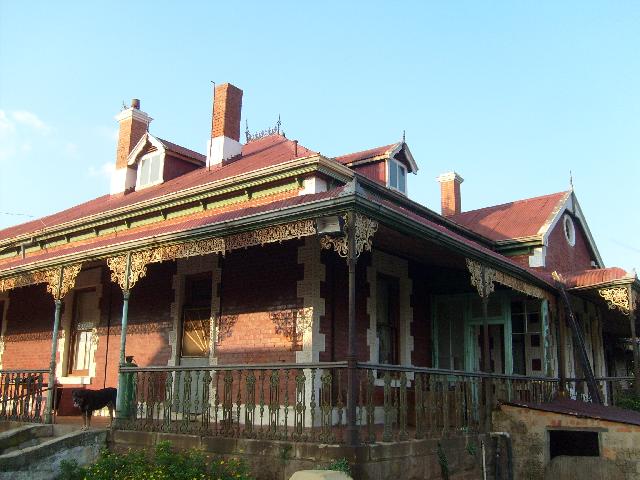 Around the back I met the owners. The old lady told me it’s a family home, built in 1905. Her maiden name is Bezuidenhout, and her son lives there now. They’re apparently going to restore it, I will have to go past there again sometime to check up on their progress.

Via houseblogs, I found Pecan Place.

What an absolutely gorgeous house.

And wOOOOt look at this doorknob!

It’s just a cheap trick to generate traffic, I’m afraid, but itÂ  seemed to work for Tammy and for Katie.

As penance, I offer you this. Seen on the back of a truck in Kalk Bay. 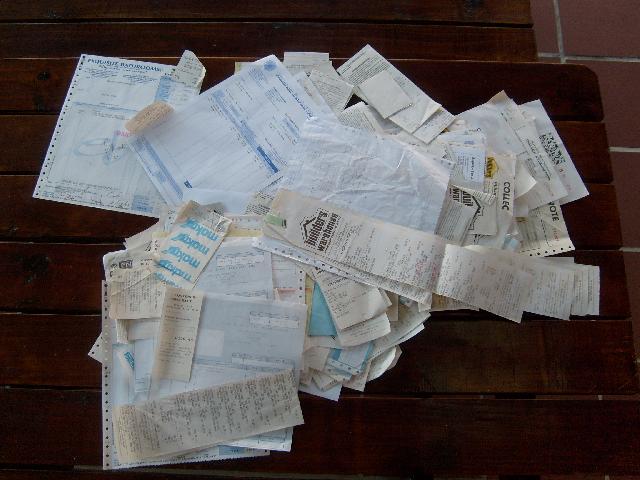 These are the invoices for most of the stuff I bought for the first year of renovating the house. Of course I don’t have invoices for the labour. I stuck it all in a spreadsheet and *gasp* threw the originals away (I *never* throw anything away).

With the cable in place, next up was the main switch, a Gigabit Ethernet switch in Tanya’s room.

I made this panel with, from left to right — the alarm box, power supply for alarm, GE switch + power supply brick, and three RJ-45 boxes (feeding the two kids’ rooms and the man cave). 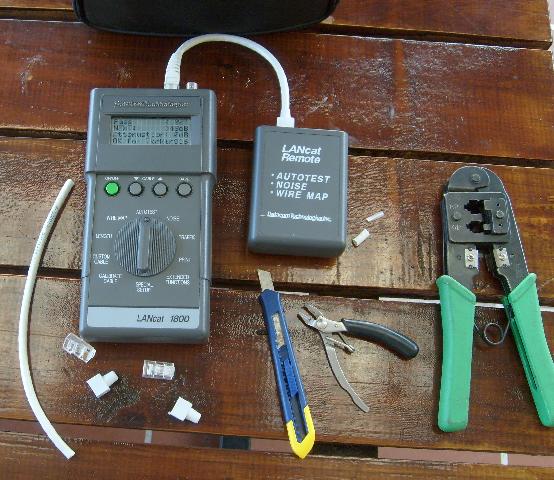 I had to make a couple of short patch cables to run between the switch and the network boxes.

So now we’re rid of the patch cable that ran across the driveway, but I still have to install a power point and a network point in each of the kids’ rooms. And I have to install the rest of the alarm system, of course.

A Limpopo schoolteacher, who found another man in bed with his wife and
fired his gun at the lover, is facing a claim of more than R1 million in
damages.
Police Inspector Andrew Moshoana, 41, was shot through his neck as he was
running home. As a result of his injuries, the policeman can no longer use
his right arm and hand.
He is now blaming Andrew Mokoena, 38, for his ill fortune, stating that
Mokoena tried to take the law into his own hands.