The battery on Tanya’s Dell 910 (Mini 9) failed a while ago. Works from mains, dies the moment you unplug the charger.

So I bought a new (generic) battery off Amazon.

Plugged the new battery in and got a beep code, 2-2. My first thought was that I might need to downgrade the BIOS, since some generic batteries only work with the older A04 BIOS (Even though this specific battery is supposed to work with newer BIOS as well). Tried using the old battery, but the error persisted.

So I tried looking the beep code up. What a mission.

The Dell documentation has nothing. Dell Iran mentions that the 910 uses beep codes and not LEDs, but the site’s down, and the page listing the beep codes isn’t in google cache.

Further searches for “Dell Inspiron 910 beep codes” turned up many sites wanting to sell me a manual, but nothing else.

I eventually searched for “Dell Mini 9 beep codes” and found this link. It’s a memory error. 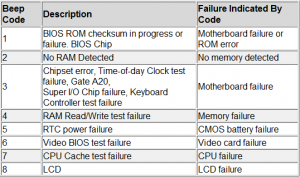 So I reseated the memory, and now the 910 comes up with either battery pack installed.

In general, the last thing you frobnicated is probably the source of your problem. In this case, it wasn’t.