One of the disks that came with my Apple ][ clone contained a little game called Nightmare #6. At the time it completely stumped me, there seemed to be no way to beat the game. I’d worked out that a move consisted of two letters, no more, no less, and that it was possible to lose points quite quickly, and also possible to not lose points, but I never worked out how to actually gain points.

For some reason I thought of this game again the other day, tried to find it. This was not easy, but plenty google later I found it in the Apple Software Bank Volume 1.

Of course my BASIC is better than it was in 1980. I learned that:

I still don’t know how the author got to the “possible 2080” points. 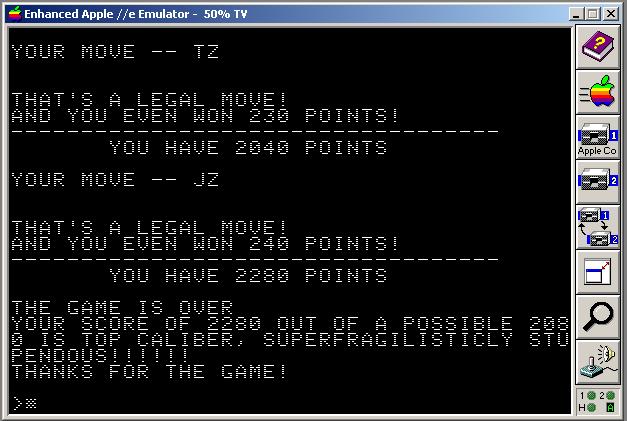 Oh yes, and this is why I’m with Jason Scott — we’re not huge Wikipedia fans because they delete perfectly good information.  Someone took the trouble to write something about Nightmare #6, and noted that it is possible to get more than 2080 points, but the editors decided that “WP is not a videogame guide“.