Earthworms, that is. Specifically, recycling kitchen waste, leading to less landfill and a healthy garden.

I bookmarked this web site a long time ago. It has instructions on building your own worm farm and all.

So when I recently revisited the topic, I found that a whole lot of new web sites had sprung up. This worm farming thing is becoming popular.

In the order I found the sites:

Full Cycle Worm Factory, Wiggler Magic Worms, Wizzard Worms, Full Cycle Can of Worms, Mother Earthworms. They also sell worm farms at the Porter Estate market, but they’re the single-bin type, and I quite like the stacked bin idea.

The Wiggler (imported) kit sells for R930, including worms — probably not that much more than the bits to make my own would cost me. They also have a locally made one for slightly less, but I prefer the look of the imported model, which is what I ended up buying. I picked it up from Vernon’s house in Lakeside. 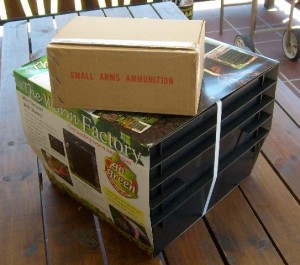 Yup, those are the worms, in the top box…

So now I have a colony of earthworms, eating some spinach leaves… will see how it goes.