So we have this somewhat crazy cat. We think he suffered brain damage when he was little, Tanya rescued him from a bunch of little hooligans in Kuils River, and it took some really good vetting work (Four Ways in Sun Valley, Fish Hoek) to pull him through.

Anywayz, so it was time to bring him through from Bellville, where he’d been living for the past couple of years (chasing “my” cats, Benny and Joon, to go live with my parents, but that’s another story). When he was little we took him everywhere — to Bellville, often, and to Gansbaai in the Rand Lover, and so forth, and so on, so he doesn’t mind cars much. Just don’t put him in a basket. 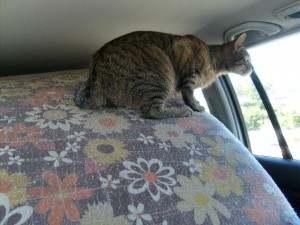 I also packed a whole lot of other stuff that had to go through, but the front seat was free… nope, he wanted to be on the mattress in the back. It got a bit stuffy after a while and he was a bit upset, but Baden Powell drive runs next to the sea so I opened a window and all was fine again.

I asked the ladies at the pet shop about relocating cats, the one said “keep him inside for a month” and the other said “make that three months”. Hah. We kept him inside for almost two whole days and he’s fine. He’s been slowly expanding his explorations (I believe one should never carry a cat from one spot to the next, they need to walk there themselves to memorise the route and the way back) to the point where the neighbours’ yards are next.

Now to teach him to use the cat flap. And to sleep at night.

(Picture of Benny by Tanya)