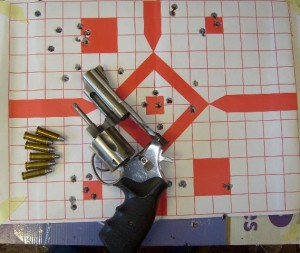 Last year, at a GOSA meeting, Adrian persuaded Thomas and me to shoot IDPA with him (didn’t take much persuasion, truth be told).

Also last year, I joined the False Bay Gun Club. I mean, it’s 5km on the dot from our house, I can just about walk there. Good excuse to shoot more often. I initially thought it was a pistol range only, but it turns out there’s a 130m rifle range too. Amazing what one can fit into an old quarry.

So when I heard, on Friday, that they were shooting IDPA qualifiers on Sunday, I had to get my act together. I had 40 odd rounds of 38 Special lying around (158 grain SWC, 5.5 grains of MP200, PMP magnum primer). Took that to the range on Saturday, to check where it shoots relative to my carry ammo (125 grain Hornady XTP, 1400 fps). Turns out it shoots to exactly the same point-of-aim. Bonus!

Then I had to rush off to Bellville to get primers and powder to make more ammo. While in Bellville I helped Pieter pull a 3 phase circuit into his kitchen extension. Back in Fish Hoek I set up the Lee Pro 1000 and made a few hundred rounds.

Sunday morning was the qualifier, which took a bit longer than anticipated. I think more than the expected number of people pitched. A second range was quickly set up, and great fun was had by all. I was told I did OK for a beginner, will see when the scores come out :-)

Also, revolvers strike the primer a little bit harder in single-action than in double-action mode. I had a few soft strikes. Of course with a revolver the trick is to just keep going, in general the round will fire the second time it’s hit. If not, well, then you need to reload. But I need to shim the hammer spring just a little.

I have a habit of trying to collect the brass. This can get you killed in a real-life confrontation. I need to learn to ditch the brass, pick it up later.

And my carry holster works fine for its intended purpose, but it’s not going to work for IDPA. I needed to remove the holster, holster the gun, and then slip the holster back IWB. I have other holsters, but they’re in Bellville…