Working in Kuwait. Blogging from the eee (running puppeee BTW).

Flew out of Cape Town on Saturday with 90kg of equipment. Between three of us, with a few items of clothing added, and after weighing the carry-on (which was about 5kg less than the allowed 21kg for three people) and subtracting that, we were 10kg overweight, for R3000.

That’s a lot cheaper than couriering the stuff

Plane left at 1800 or so so we got supper. Then at 0100 SA time they woke us up for breakfast, because we were about to land in Dubai.

Dubai International reminded me of that scene in Men in Black. If you know the movie you’ll know which scene I’m referring to.

After a few hours got on another plane for the short (< 2 hour) flight to Kuwait, and we got fed again.

So I’m not hungry.

Worked in 36 degree heat (OK, I lie, they do have aircon but outside is… interesting) from about 11 to about 5. Apparently 36 is a nice day and it occasionally hits 60+. Thanks but no thanks.

Fellow driving us around had to fill up. R1.30 a litre. That’s not quite one tenth of what we pay back home, but it’s not far off. He couldn’t get four Dinar (R100) into a bone dry Dodge Charger…

Internet is also interesting. I can receive mail but I can’t send. I know neither of my mail servers will tell me “Connection refused” when I try to telnet into the SMTP port, so I guess it’s blocked. MSN also doesn’t work. IRC does, but I want to chat to my wife not #GBC.

(Incidentally, here’s a picture for the #GBC guys) 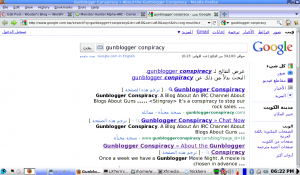 So apologie to all of y’all (if there’s more than three of all of y’all) iff’n you get bored being cc’ed on sitreps to home.