Whoever did the piping had… interesting ideas. I found the main feed, 3/4″, going to the geyser in the roof. Coming from the geyser there’s another 3/4″ pipe, which disappears under the cement stoep and from there presumably some magic happens, resulting in hot and cold water pipes sprouting from the stoep where required. 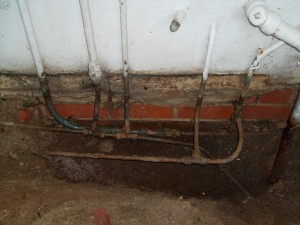 Of course this means that the water will take a while to get hot. And I don’t know what the heat loss in or under the cement stoep is — suffice to say that This Must Go.

OK, I need to take bits of the stoep up to plumb in the new bathroom, and other bits of the stoep are cracked, so chopping it all up to get at the pipes is no biggie. En ek skrik nie vir plumbing nie, net vir die prys van koper.

So I’m off to buy a rather large geyser [1] from De La Rey (which is called Builder’s Warehouse these days but who cares). I’ll see about plumbing a solar collector into this [2].

And then the pipes will run straight and to the point and I’ll even wrap some insulation around them.

[1] The geyser that’s in there at the moment sports a five-digit Cape Town phone number (we’re up to 7 these days) which sort of hints at the age of the house. And it’s rusting from the outside in. But mostly it’s one of those horribly inefficient tank types, and now’s a good time to replace it.

[2] Buying a solar, electrically assisted geyser would be easier, good for the environment (or maybe just for Eskom), and roughly ten times as expensive if you include everything. I can’t afford to pay for Eishkom’s mistakes, I’m afraid.