Once we knock out the wall between the kitchen and the living room, we’ll have a 3.030m hole in the wall — and that weight needs to be supported, not only later, but while doing the actual knocking out.

So the instructions to the Malawian Trio is to remove a single row of bricks, leaving the wall supported by the other course of the double wall, and to then build the lintel into the resulting hole. We will then prop the lintel up and break out the wall below it. 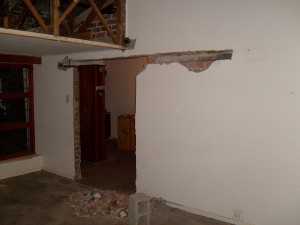 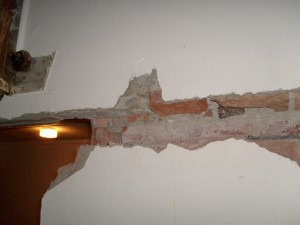 So I got there to see that they found an existing lintel over the existing door. It was cast in place, too, so it ain’t gonna come out. Hmmm. Should have thought of that. Looks like they then thought to put the new lintel under the old one, which will work, but maybe that makes the doorway too low.

So the new plan is to keep the existing lintel and to add a shorter-than-originally-anticipated lintel to the right, with some kind of a bearing place to support the whole mess.