We drove up to Kakamas after work on Friday 10th June. Got there close to six o’clock in the morning. It’s a bit of a drive.

First point of order was hunting springbok, in the Boesmanland. Since I didn’t want springbok, I was pretty much a spectator on this one. 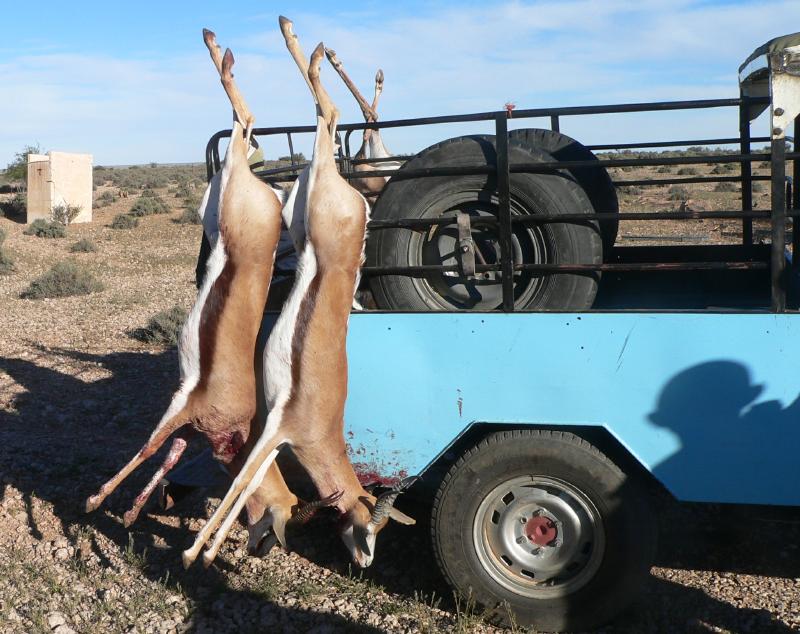 Note the hole in the neck of the lefthand springbok. The buck went down, and we approached it too quickly. It got up and ran for five kilometers before it bled out. Five kilos. With a hole in its neck I can stick my fist in.

After that we were off to the Kalahari for gemsbok and the odd springbok.

Close to Upington we went past Khi Solar One. This is the first year we’ve seen it operational. 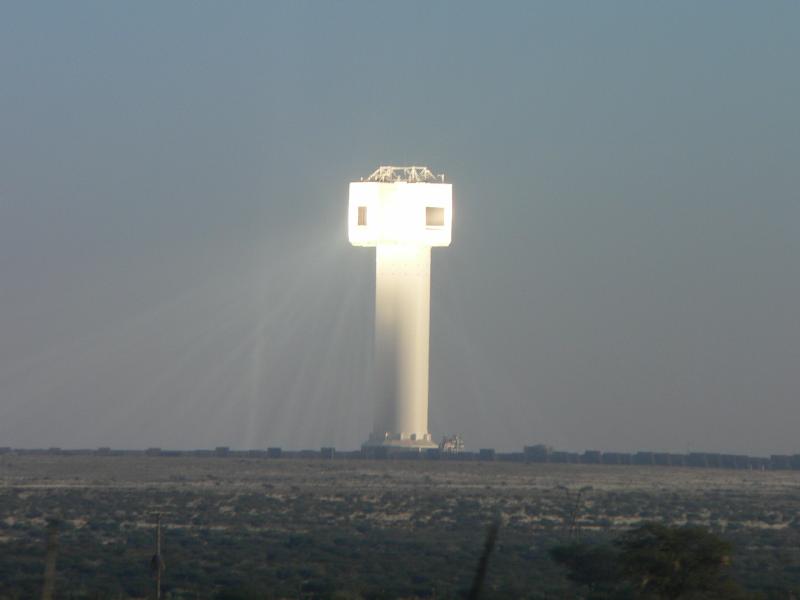 First job was to add shutters and insulation to the cold room (there’s no refrigeration. At night it normally gets cold enough so that you can just close things up in the daytime, preserve the freezing overnight temperatures. This year that did not happen, so we sent the farmer back to Kakamas to hang the gemsbok with the springbok from earlier). 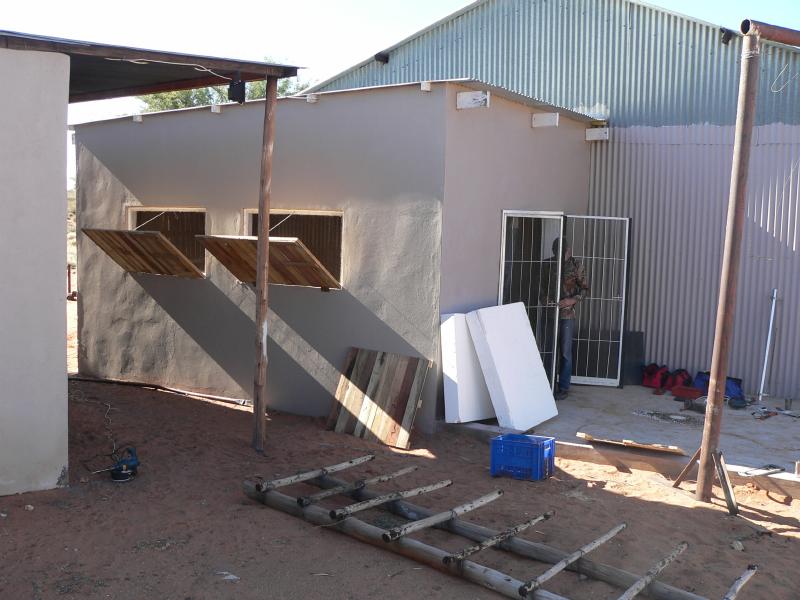 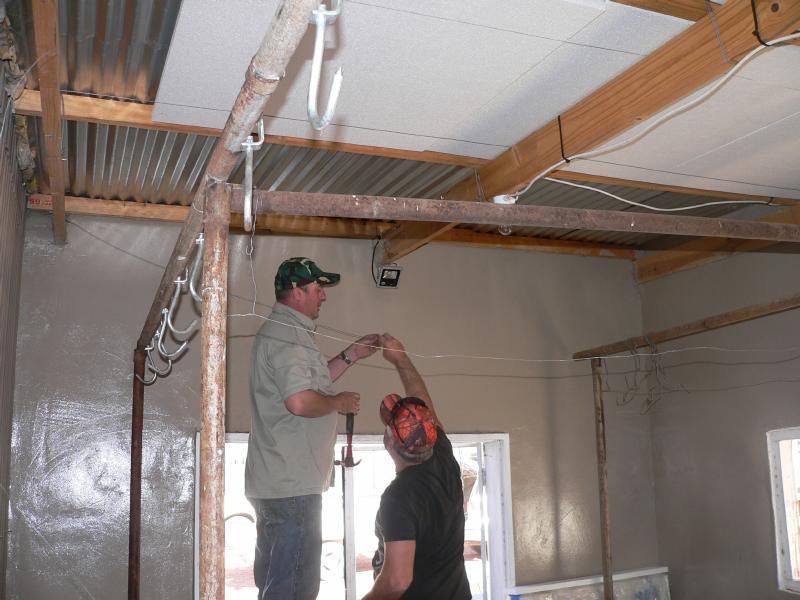 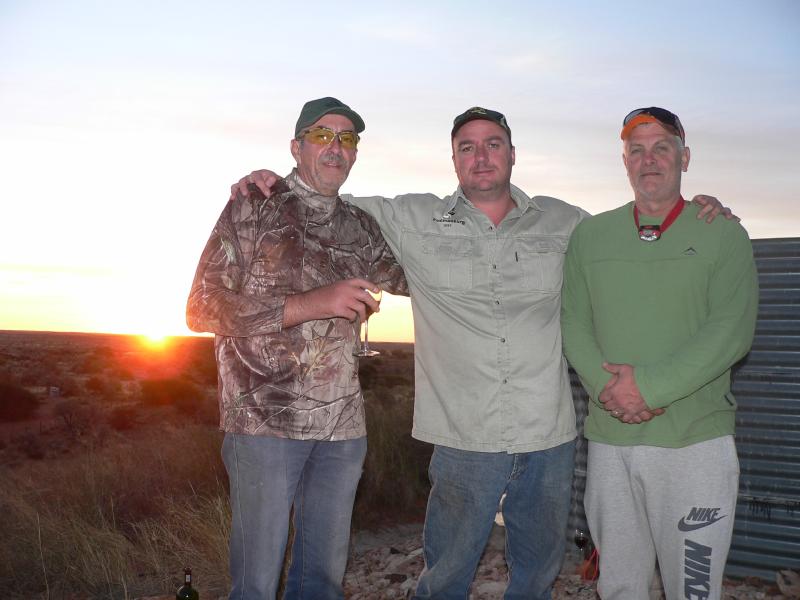 Sunsets are traditionally imbibed on the top of the hill next to the water tank (water comes from Upington / the Orange River via a long pipe, the tank provides pressure).

Sometime around here, somebody (who shall again remain nameless (local copy)) remembered that “we” left the meat in the freezer back in Kakamas. Time to take stock. Shotgun, check. Shooting lamp, check. Bakkie, check. 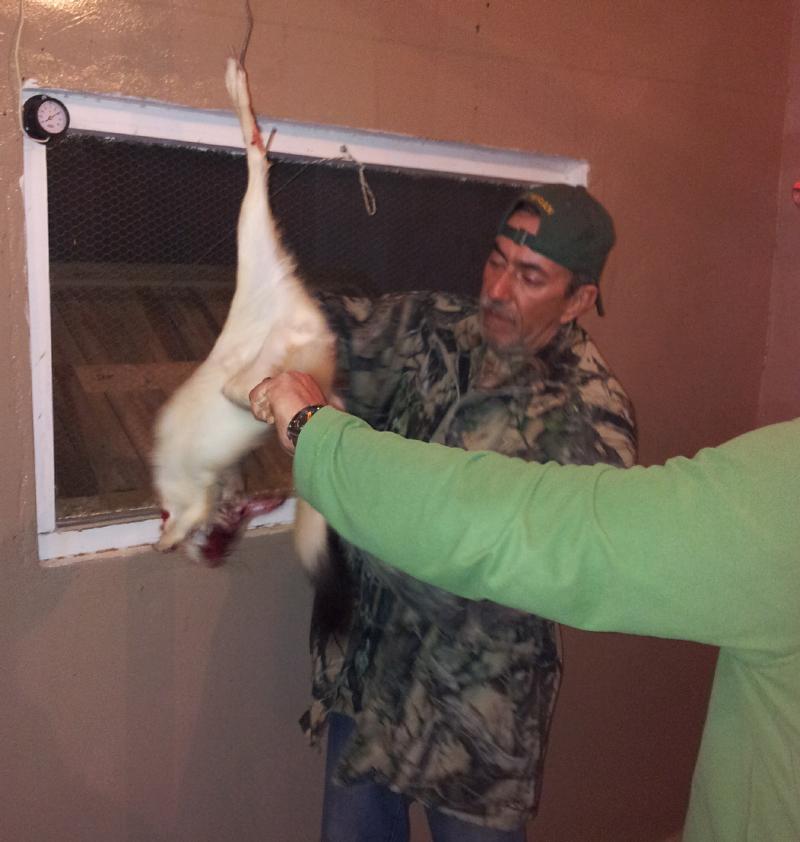 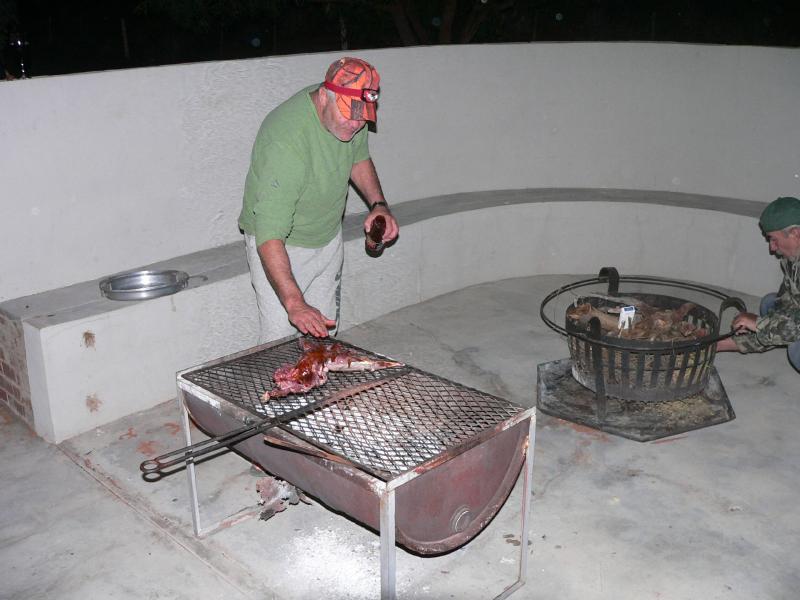 Fire, check. Anything’s better with barbeque sauce. And the remains went well in the omelettes the next morning too.

Spent the next day recovering, shooting the guns in, making sure the quality of the alcohol was up to spec, and so forth and so on.

In the mean time we heard that the four fellows coming from Gauteng hit a kudu outside Vryburg, totalled their vehicle, and decided to cancel their trip. So there were four of us, with a shopping list of seven gemsbok and as many springbok as we could find. 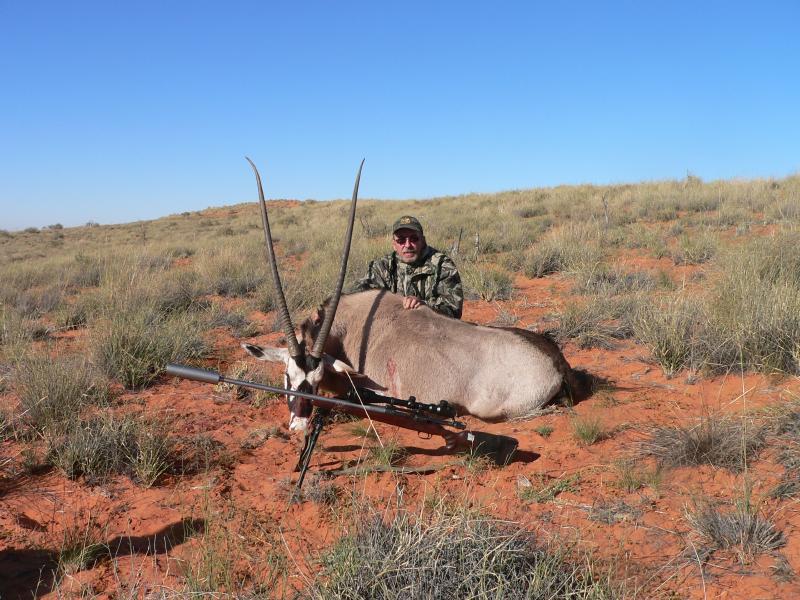 Number one. T thought that this was a bull, turned out to be a rather large cow. 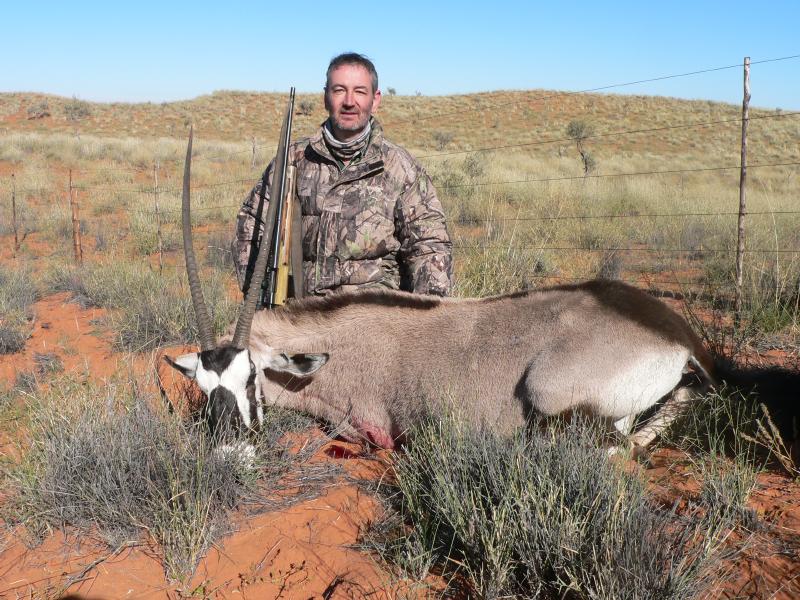 This lone cow came running down the wire so the choice was shoot or don’t shoot and I chose the former. Through the heart, she left a blood spoor for about 50m and went down. Didn’t even need a finishing shot. 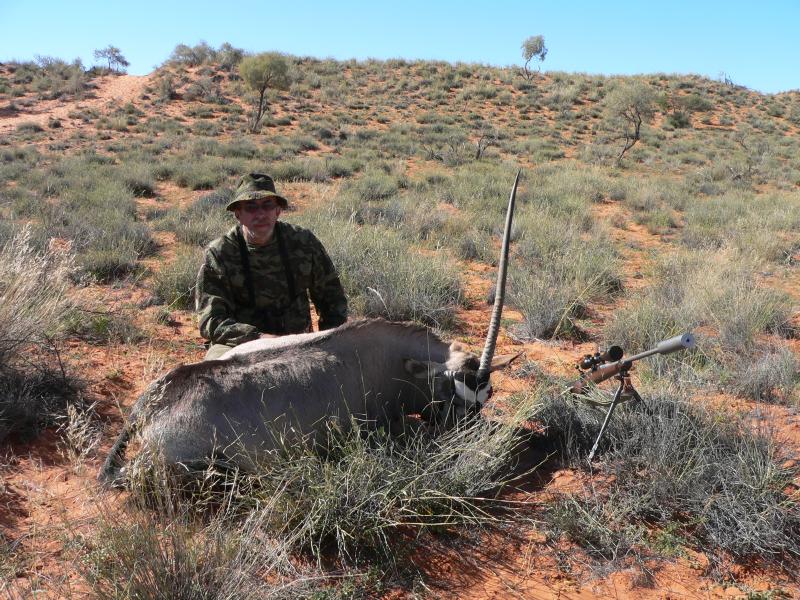 T shot a one-horned cow, but not the one he was (is still) looking out for, which is apparently huge.

And it was time for lunch. 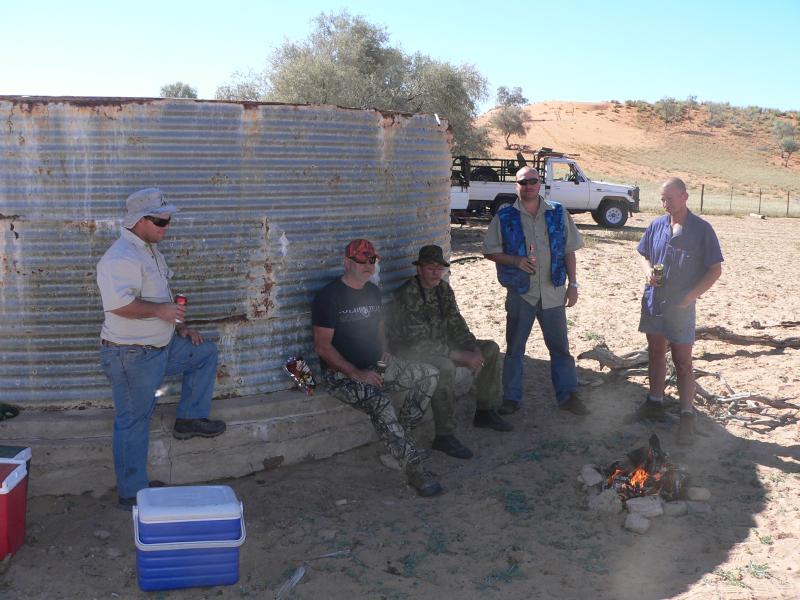 After lunch we took a long drive down to the white lorry (a truck that got stuck many years ago, on a neighbouring farm) and found a different herd of gemsbok. I picked out the first one I could find that was (1) a reasonably big male (2) standing still (3) with no other animals in front or behind it. 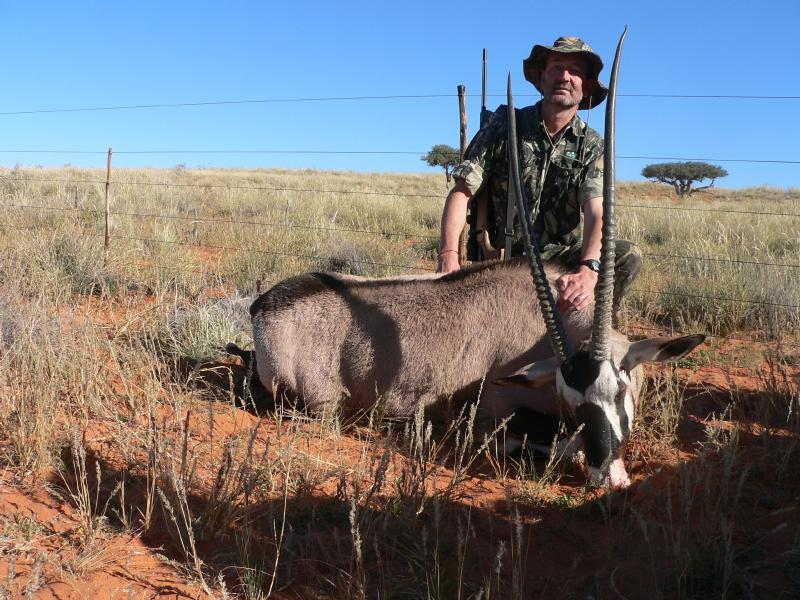 We figured four gemsbok (and a lone springbok T had bagged) was enough for one day and headed back home. 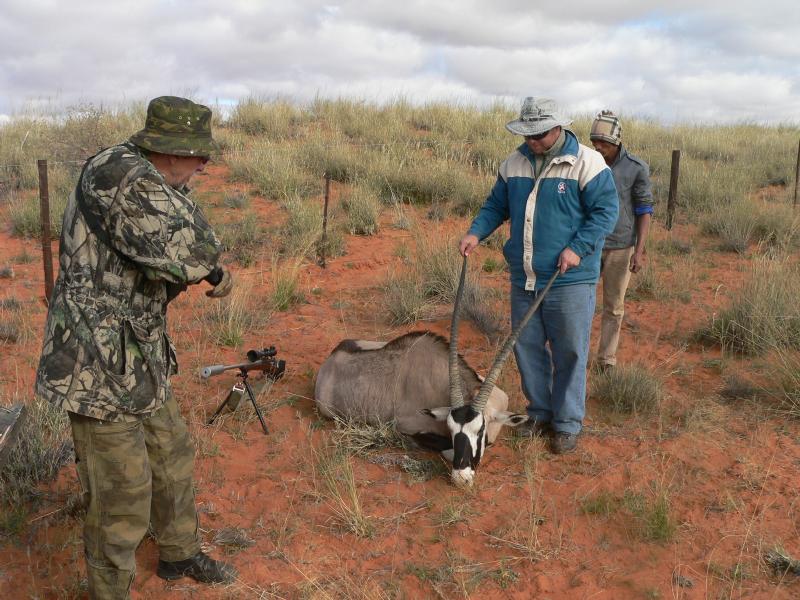 The next day T shot this bull, two springbok and a boerbok (they’ve gone wild, you’re not going to catch one in the conventional way, gotta shoot ’em) bringing the total to eight gemsbok (one for the church), fifteen springbok (of which we took 14), two boerbok (of which T took one) and one haas (consumed on premises).

We sent the meat to Kakamas with the farmer, spent the evening drinking, and returned one day early, via Kakamas where we still had to remove the skins, cut the meat into pieces, and load the trailer. 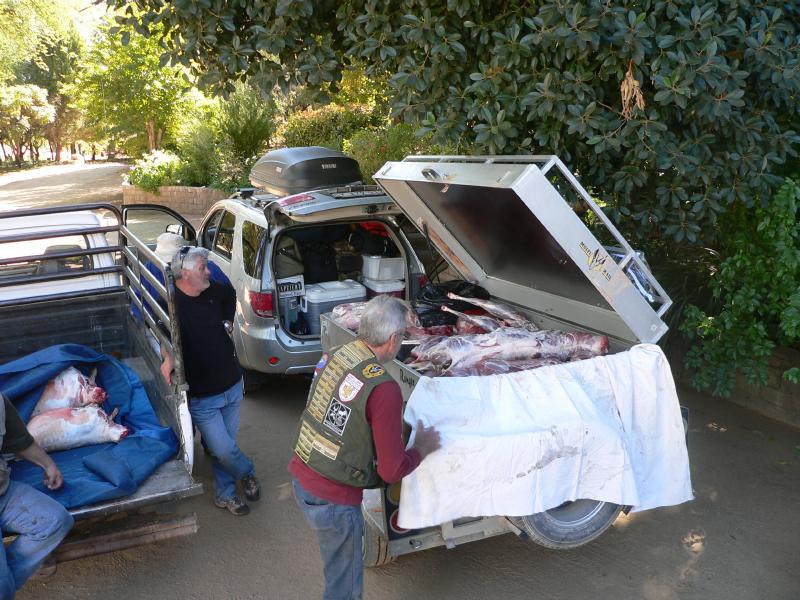 That’s a rather full trailer (we also bought some mutton from the farmer, a total of five sheep). 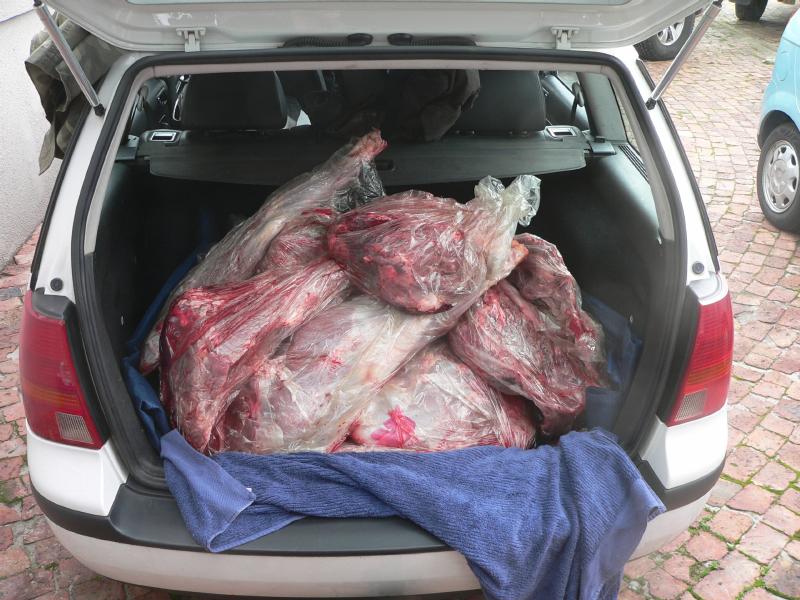 My share (two gemsies (86 and 89 kg), one sheep) on the way to Piet’s to be made into biltong, steaks, patties, mince and wors.