I wanted to use low-voltage LED undercounter lights in the kitchen. I liked the strip lights from LED z Shine, so I phoned a rep, who promised to get back to me and then… things went quiet. Contacted them recently, but they don’t deal direct and suggested I go to Eagle. The guy at Eagle was particularly non-helpful, said he’d have to order the stuff in and made it clear that he didn’t really want to do that.

So the other day in Cape Town I walked past an electrical store (RG Jack in Bree Street) on my way from the toy store. Popped in, found this 220V fluorescent strip light. It’s rather expensive, almost R600, except they then give 55% discount so it’s R255 out the door. 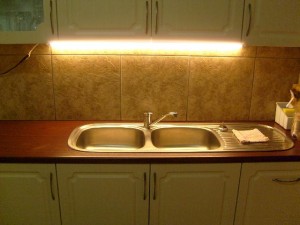