We looked at different options for baths and sinks, with aesthetics being more important for the baths and price (and size) being the factor for the sinks. I’ve been set on the Libra Misty bath for a while (it would have been in Jessica’s en-suite bathroom in our previous plans), and Tanya decided on the Libra Neptune Euro for our main bathroom (The “Euro” is the 800mm wide version). When it comes to kitchen sinks, the Franke Curvline is their narrowest option, at 435mm, so I asked for quotes on both the 1235 and 1500mm long versions (all quotes from Exquisite Bathrooms, because they’re just down the road from where I work and because while I’ve been bothering them on and off for a long time they’re still nice to me :-).

Meanwhile Mica in Bellville was running a special on the Neptune Euro, at 1499, but Exquisite Bathrooms came through and quoted 1307 + VAT = 1489. The Misty is expensive at R 4 162 with the front panel included, but it’s… nice. We also like the Verona cloakroom basin (as an addition to the main toilet), but I guess it’s imported, since it goes for about R820, more than I want to spend on a small handbasin (I can get something similar from Mica for under R200).

Exquisite quoted 1066 for the shorter Franke and 1556 for the longer one. The extra 265mm is not worth it in my opinion.

I also balked at paying R605 for a basic round stainless prep bowl, and picked one up at Muizenberg market for R150. 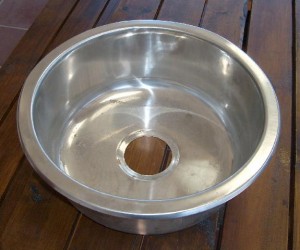 Comparative shopping also works for toilets — a basic close-coupled dual-flush unit goes for 2200 at one place, but we got a different model from Brights for 499.

And then of course there’s the price of plumbing fittings. Copper pipe is… unaffordable. Which is why I’m reusing as much as possible (unfortunately the existing T fittings are really old, requiring one to flare the pipe over a ferrule, rather than slipping the ferrule over the pipe). There’s a plastic composite alternative, which also uses compression fitting and sells for R11/m. But I can get polycop at Muizenberg market for R3/m (this is all for the 15mm stuff). OK, polycop flows less than the other alternatives, but I can fit 22mm polycop for a lot less than 15mm anything else.

Of course when working with copper one can use the solder type fittings (Solder elbow 5.75, compression elbow 16.50. Solder T 9.50, compression T 21.25) but you need a gas torch, which will set you back a few hundred, so it’s not economical for small jobs. I have the torch, so I’ll be using solder fittings and left-over pipe for some of the plumbing, and polycop for the rest.