Today, a year ago, we took possession of the house. It’s been… a journey. A long one, and we’re still on it.

Maybe it’s time for the long awaited kitchen sink backsplash post. Frank finished the tiling and grouting last Friday, but I’ve been somewhat busy, so blogging had to wait. 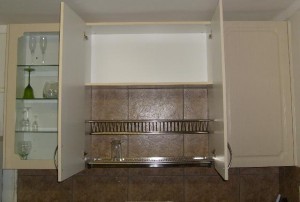 We invited some people over on Saturday evening, so the rush was on to finish the bathroom shelves (only way I get things done, invite people over :-)

These rods are also from A&D… 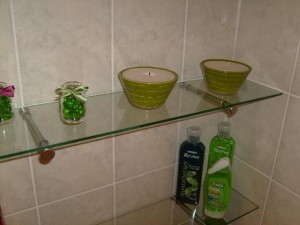 ..and this is what they look like installed. Since this particular wall consists of tile over shutterboard, I just drilled a hole and used a 6mm bolt from the other side to hold the rod to the wall. 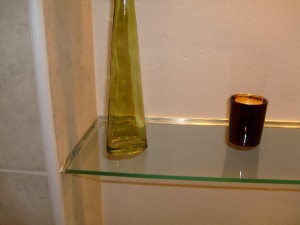 For the shelf on the other side, I used two lengths of 12mm aliminium angle, cut and filed and drilled. This is where I noticed that the whole thing is completely out of square, the tiler could have done a lot better.

I still have to change the bath… *sigh* but it’ll be nice when it’s done. And Tanya wants “her” light on the same circuit as the downlighters, there’s a DB in the ceiling, I just have to get up there… 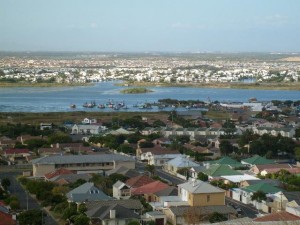 I would have liked to go and see the Kontiki rafts, but driving to the Fruit & Veg in Bellville to buy snack-ey party stuff, and putting up the shelves, took my whole day. OK, I also spent an hour at the range early on Saturday but that doesn’t count :-) Found a pretty good 7mm TC/U cast bullet load. Subject of another posting, maybe. 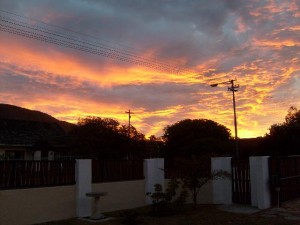 Monday evening sunset, straight off the camera, no Photoshoppery.