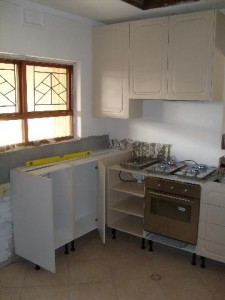 Not only because the cabinets are coming together nicely…

… but also because the cupboards are being filled with all kinds of exotic goodies I’m picking up in anticipation.

I went shopping in the Waterfront the other night, saw that they had juniper berries and star aniseed, and that sort of started it. The star aniseed is for making creme brulee, from the Marie Claire Flavours book. I’ve seen exactly the same recipe online, will find and post a link.

Then came yesterday’s shopping trip. The cover story is that I need a wok. The folks-in-law have a cast iron wok that really works well. I can get something similar from Le Creuset in Cavendish, but it’s rather expensive, as Le Creuset tends to be. So I said that at some stage I’ll go to the Chinese/Japanese/Oriental shops and have a look-see.

The second story comes from a conversation I had with a friend (CH) a few months ago, which went something like this :

<me> I want to make Barbara’s Sichuan Shredded Chicken.
<CH> And you are going to get black vinegar where?

But the real reason I went Chinese shopping yesterday is all Barbara’s fault. In particular, #76, baijiu. I couldn’t believe it’s as horrible as the wiki indicates. To quote, “There are a number of accounts in English which comment unfavorably on the taste of baijiu, comparing it with rubbing alcohol or diesel fuel“.

So I went to Mainland China near Cavendish in Claremont, found 500ml of Er Gou Tou for R18.75 (note : this is less than the cost of a sixpack of beer). I also got the black vinegar, some Tom Yum paste, and an intriguing bottle of “Confucious Family Liquor” which was the most expensive of the lot, R43.80 the bottle (note : R40 is what a relatively decent everyday drinking red sets me back most of the time. Just to put things into context for non-local readers).

So now, I feel that I’m qualified to speak. And I can tell you that baijiu tastes nothing like rubbing alcohol or diesel fuel. No, it’s closer to acetone, although I must admit there’s a slight diesel fuel aroma to it — but on the nose only, not the palate.

After the first few sips (yes, I’m brave) one becomes used to the taste. Maybe because by then, my taste buds had decamped and moved south for the duration. It also has a not-so-nice aftertaste, courtesy no doubt of overly brave taste buds who make the return journey too soon.

I’m sure my Land-Rover will run on it though. 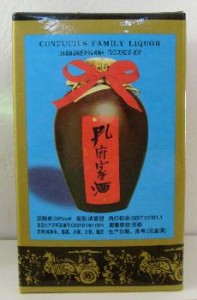 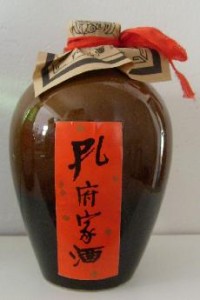 One has to admire the packaging. This is the Confucius Family Liquor, and I have no idea what it is or what it tastes like. Time will tell, I’m sure :-)

OK, back to the kitchen. As you can see from the very first picture, I eventually got the right size panel to close the front of the cabinet that goes up against the wall in the corner. 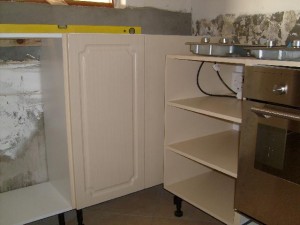 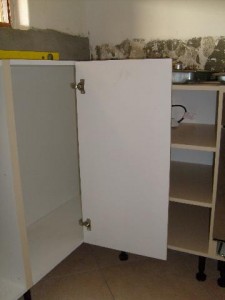 Julian originally designed the unit with a standard (left-opening) door, but I figured that the cupboard would be more accessible if the door opened the other way, so I picked up two “blind corner” hinges and used that to hang the door. The gas bottle is going into the corner, so I need the access.

With this unit now bolted to the wall, I could measure the exact size of the countertops I need. Aluta Continua.